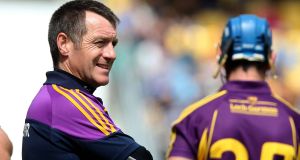 Liam Dunne: “I wanted to stay on for another year, everybody knew that. It didn’t happen and I think, in fairness, it’s been good for me and good for the players.” Photograph: Donall Farmer/Inpho

Liam Dunne will find a way. As of midweek, he had no ticket for tonight’s showdown with Kilkenny in Wexford Park but panic is not his way. He will be there. Wouldn’t be anywhere else.

“Oh, I’ll get a ticket alright. I’ll get in. I have several ways of getting into Wexford Park. I know all the exits, even the ones people don’t know how to get in or out of. But I know them – I often had to use them!”

Life is good. Still a scrap at times but then he wouldn’t be Liam Dunne if it wasn’t. For the past 18 months he’s been on the road working for Stafford Fuels; three weeks ago, he was made permanent. It isn’t so long since he used to hold team meetings in front of a room of Wexford players and be nervous of himself because he was unemployed. Wondering did they know, unsure of how they could respect him if they did.

“Deep down, within the inner soul of myself, I felt degraded,” he said.

That’s gone now. He’s on the road every hour, the odometer clicking to infinity. That’s a lot of thinking time. A lot of unthinking time, too. The incessant chirp of intercounty hurling is someone else’s soundtrack and that’s fine. He wanted badly to stay but he can live with it.

About three months back, he was beating the boreens outside Clonroche when he came across dirt on the road and noticed broken branches in the hedge. He stopped for a look and saw a car on its side in the next field, wheels spinning, lights blinking. Inside was a young lad, early 20s, in a bad way.

Dunne was on the phone to a Garda friend at the time and got him to send the ambulance. The kid was airlifted to Cork, his prognosis terrible. Forty-eight hours, they reckoned.

But then, a fortnight ago, his mother rang Dunne to say he’d just been brought home from hospital. He was in a coma for weeks but they’re miracle workers in these hospitals and the boy is going to be okay. The road is long but it’s there and it’s his.

“Between that and my mother dying in January, you realise you have a lot to be thankful for,” Dunne says. “At times I would miss the whole environment of it. The banter, the camaraderie of having been involved with those lads for so long – I would miss that at times alright.

“Look, I wanted to stay on for another year, everybody knew that. It didn’t happen and I think, in fairness, it’s been good for me and good for the players. It has worked out well. I’m happy and very content with where I am at the moment. I put a lot of work into that as well, I can tell you.”

The official record tells you Dunne did five seasons with Wexford but, really and truly, he put more than a decade into it. He and Tom Dempsey took over the Wexford U-16s for two years and the minors for another two back in the mid- to late-noughties. Of the Wexford squad that will line up against Kilkenny with a serious chance of a first championship win since 2004, 11 came through their hands back then.

“You go through it – Mark Fanning, Matthew O’Hanlon, Liam Óg McGovern, Diarmuid O’Keeffe, Harry Keogh, Eoin Moore, Shane Tompkins, Shaun Murphy, Andrew Shore. All those guys came through from that time. You’re talking about savage work that went into those guys over the course of a decade or more and savage work done by them themselves. It’s great to see them coming through in a batch like they did. I take great pride in that, to be honest.

“You’re in a pressure cooker the whole time when you get to senior level with them. Expectation is huge. And that’s even coming from where we were coming from. Like, we were on a par with Laois a few years ago. Offaly were ahead of us. Look where those counties are now and look where Wexford is. We got a lot of small little victories along the way but it has been a long, long road for those players.

“The amount of transition was phenomenal. You were getting guys coming in and trying to get them to buy in to what you wanted to do. Some of them did but others just left because it was too much for them. They didn’t want to put it in. That took a few years but that transition is fairly well over now. You have one or two guys coming in every year but that’s normal. We were bringing in five and six debutants a year. That’s gone. The base is there now.”

They had their days. In Dunne’s time, they never made an impression on the Leinster championship but they posted qualifier wins against Clare, Waterford and Cork. The strength and conditioning work under Gerry Fitzpatrick transformed their bodies, endless hurling wall sessions with Paudie Butler uncorked their skills.

Dunne has never shown the players the video of their first wall session with Butler – he wouldn’t embarrass them, he says. He loved those players dearly and for the most part, the feeling was mutual. When he had a pop at some local yahoo commentary over an April holiday he took last year, he said people should be more worried about producing hurlers than sticking knives in his back. The line stuck.

A few months later, they had a team meeting in Horse & Jockey before going out to play Cork in the qualifier in Semple Stadium. They were about to walk out the door at the end when Dunne caught the eye of Liam Óg McGovern, the wing-forward who will sadly miss tonight’s game with a second cruciate tear in eight months.

“I was just thinking,” McGovern said. “Today would be a good day to make sure a few knives come out of your back.”

So yeah, he misses them. But he’s delighted for them. Beating Kilkenny was something he never got close to but he’s not surprised they had it in them. He knew they were coming. He knew it better than anyone.

“There’s still a long road ahead. I think promotion to Division 1A is big but even bigger will be the need to consolidate that next year. And then I think you will see the best of them the following year. I think that’s when you are going to see Wexford properly coming back as a force. I still think there’s a bit to go.

“I’m not getting as carried away as other people. I’ve seen the ups and downs too often. The graph with me was unfortunately never consistent. That level of performance that we were looking for never materialised on a consistent basis. They got that in the league this year, up until the semi-final. But that’s what they need to continue if they’re going to come back as a force.

“You have to be realistic as well. Kilkenny are not the force they were. But this is still a huge challenge. I have a small bit of fear for what’s coming, to be honest. Kilkenny always come back at you. I just feel that Wexford brought a very physical approach to the game in Nowlan Park and Kilkenny weren’t ready for it.

“They normally are ready for it but they weren’t that day and they paid the price because they came up against lads who have been on programmes for three or four years to get in the right physical shape. And I think Wexford are going to be hit head-on. There’ll be no go-back in Kilkenny. I would be very surprised if the game finishes with 15 on each side. It will be a very physical game and Wexford need to focus on their gameplan and not get knocked off it. Kilkenny will come with a very different attitude.”

Ask him if it will feel strange to watch from the crowd and he laughs.

“Not at all, it won’t be strange. It will be great. Wexford Park will be buzzing. That’s all you’d ever want.”

It didn’t happen under his watch. But it couldn’t have happened without him.

1 Diego Maradona dies of heart attack, aged 60
2 Keith Duggan: Through the glories and the disgraces, we were all Maradona addicts
3 Darragh Ó Sé: Cork and Donegal went out with the wrong attitude
4 Andy Farrell to delve deeper into Irish squad for team to play Georgia
5 Gordon D'Arcy: I know what Joe and Cheika would do. Fix the basics
Real news has value SUBSCRIBE