Diarmuid Connolly incident to be considered by CCCC on Tuesday 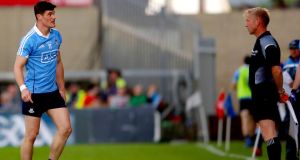 On this occasion there’s no avoiding the cliché. Dublin face an anxious wait to learn the outcome of the referee’s report on Saturday’s Leinster quarter-final win over Carlow - and potentially more importantly its aftermath.

All Star Diarmuid Connolly was seen on television pushing and pointing a finger at linesman Ciaran Branagan from Down in protest after a lineball call that went against Dublin. He faces a possible 12-week suspension.

Referee Seán Hurson was standing nearby but neither he nor the linesman took any action against Connolly. The question for the GAA’s Central Competitions Control Committee, which meets on Tuesday, is whether the matter was adjudicated on by the officials. If not the CCCC will be free to deal with it.

It is clearly an infraction under category v (i): “minor physical interference (e.g. laying a hand on, pushing, pulling or jostling) with a referee, umpire, linesman or sideline official”, for which the player could have received a red card during the match.

The minimum suspension for being found to have broken the rule is 12 weeks.

Other infractions for misbehaviour towards officials are “remonstrating in an aggressive manner,” which gets a black card and “challenging the authority” of a match official, for which a yellow card is prescribed.

Coincidentally, Branagan was also the linesman who brought Connolly’s foul on Kerry replacement Gavin Crowley to the attention of match referee Paddy Neilan in the league final last April, in consequence of which the Dublin player in the 30th minute received a black card that arguably cost his team the match and their title.

On Saturday in Portlaoise the incident was preceded by Connolly grabbing the ball and being surrounded and jostled by three Carlow players. His remonstration with Branagan took place as he re-entered the field.

The CCCC meeting on Tuesday is a scheduled one to finalise details of the first round All-Ireland qualifier draw, which takes place that morning. Connolly’s case is likely to come up and the first task will be to ascertain from the referee whether he “adjudicated on” the incident.

McGeeney accepted his punishment whereas Comerford had an appeal turned down at the weekend. In both cases the incidents were reported by the match referees.

Assuming the Connolly incident isn’t mentioned in Hurson’s report, the referee is likely to be asked if he adjudicated on it and should the answer be ‘yes’ the matter will be closed.

If the answer is in the negative the CCCC will be free to consider the video and propose a suspension.

Dublin will feel that should it come to a suspension they have a case in the failure of the match officials to take action at the time, but that may be hard to argue should Hurson declare that he didn’t adjudicate on the matter when it happened.