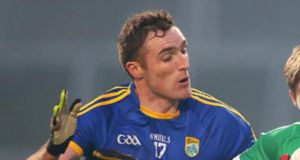 The Falcon Labs brand fat-burning supplement Oxyburn Pro Superthermotech has been revealed as the product which caused the anti-doping violation of Kerry footballer Brendan O’Sullivan.

It resulted in O’Sullivan’s positive test for the banned stimulant methylhexaneamine (MHA), back in April 2016, for which he has already served a reduced suspension of just 21 weeks.

According to the reasoned decision, O’Sullivan explained that he took a supplement called Falcon Labs Oxyburn Pro Superthermotech: he asserted that it was a “contaminated product” as defined in the Irish Anti-Doing Rules, because MHA was not disclosed on the label or in a reasonable internet search which he asserted he had carried out before taking the product.

After analysis by Sport Ireland, carried out at the World Anti-Doping Agency-accredited (Wada) laboratory in Cologne, of tablets left over from the original tub which O’Sullivan purchased, analysis of tablets from an unopened tub of the same product and “consideration of sworn testimony” from O’Sullivan regarding the internet search he had carried out, Sport Ireland accepted that it was a contaminated product case, and that he “bore no significant fault or negligence and specified a sanction of seven months which it considered appropriate.”

Falcon Labs brand Oxyburn Pro Superthermotech is a supplement sold in capsule form which claims “can dramatically improve the rate in which body fat is burnt as well as providing a huge increase in explosive energy levels.”

Available on-line through a range of supplement distributors, at a cost of €35 for 60 capsules, Superthermotech is branded as “a combination of the strongest and most effective weight loss and energy boosting ingredients available on the market today. When taken in combination with a healthy balanced diet an regular exercise the results can be remarkable!”

MHA, however, is not listed on the label as being among either the active or inactive ingredients, although it does contain Citrus Aurantium, the controversial weight-loss fruit. It does also come with a warning: “Superthermotech are Laboratory-Tested and must be used with caution only by healthy adults capable of handling its true power. It is mandatory that users get clearance from their physician before use.”

On Monday, Sport Ireland issued a statement explaining the strangely convoluted timeline of O’Sullivan’s subsequent ban: he returned the positive sample after Kerry’s league defeat to Dublin on April 24th 2016, and while O’Sullivan admitted the offence, he then appealed the already reduced suspension of seven months: the standard minimum ban for a doping offence is four years, typically reduced to one or two years when the “no significant fault” defence is accepted.

O’Sullivan’s suspension was lifted during that period, and on January 5th of this year his appeal was sent to the GAA’s Anti-Doping Committee, who further reduced the ban to six months; however he appealed that again to the Sport Ireland Anti-Doping Disciplinary Panel, who imposed a period of suspension of just 21 weeks.

It meant his suspension was served in two separate spells - from May 13th to July 28th last year, and from February 26th to May 6th this year.

Some erroneous information regarding methylhexaneamine has been circulating this week in the aftermath of O’Sullivan’s case: it has in fact been on the Wada prohibited stimulant list since 2004, although it was reclassified as “a specified substance” in 2011.

Wada defines “specified substances” as those that can “enter an athlete’s body inadvertently and therefore allow a tribunal more flexibility when making a sanctioning decision.”

There are however different interpretations to this stage of the process. Jamaican sprinter Nesta Carter returned a positive test for MHA last year when frozen samples from the 2008 Beijing Olympics were re-tested, his results were then disqualified, including the 4x100m Olympic relay gold medal he had won with team mate Usain Bolt as the anchor (thus stripping Bolt of his historic Olympic sprint ‘triple-triple’).