GAA weekend that was: Ulster Championship the flag bearer no more 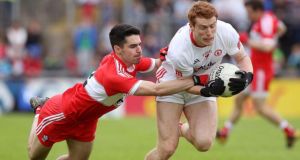 If Derry v Tyrone is gone, what claims can we make for the Ulster Championship now? Sunday was Tyrone’s third championship win in a row over their hated neighbours, a sequence that has never happened before in the 91-year history of the rivalry. For the first 89 of those years, Tyrone had only ever managed one double-digit win in the fixture - now they’ve run up back-to-back 11-point wins.

Just like in 2016, the Ulster Championship has opened with a run of dreary punishment beatings that were over long before the final whistle. Three games so far, with winning margins of nine, 16 and 11 points. An average gap of 12 points a game. This time last year it was just over eight. At the equivalent point in 2015 it was four.

Even if the sample size is small, it should be noted that all three games so far have followed the same pattern. The underdog teams - Antrim, Fermanagh and Derry - have all hung in to a reasonable degree for a respectable length of time before getting blown out of the water the longer the game has gone on. Fermanagh were a point behind Monaghan on 43 minutes, Antrim were a point down on Donegal on 33, Derry were only three back of Tyrone on 46.

But thereafter, each game was a procession. The three leading contenders for Ulster honours stretched their legs, ran their benches and kicked for home. Monaghan got five points from their subs, Donegal mined 1-6, Tyrone 0-7. Each of the defeated managers talked afterwards - either defiantly or fatalistically - of the challenges of not playing with a full squad.

This gets to the nub of what has rotted the provincial championships from the inside. The best teams keep their players. The ones below them struggle to get their optimum panel together. The gap between the set-ups where everyone is invested and the ones where some are and some aren’t only widens as a result.

Fermanagh have lost 20 players in two years between injuries and walkaways. This is Damien Barton’s second season as Derry manager and he has handed jerseys to 71 players. The Antrim team that lined out against Donegal eight days ago fielded only five of the team that started the same fixture last year.

People talk about competition structures as the great bane of the modern football championship but it’s actually more simple than that. In too many counties, players are deciding that intercounty life isn’t for them. Be it falling out with management, going travelling, concentrating on building a career or even just saying it’s any of the above and simply going and living a normal life, the middle-to-lower tier of football counties are being drained of players year after year.

And here’s the thing - it’s not immediately clear why a tiered championship would put a stop to that. The notion that a secondary championship would give some of the weakest counties an attainable goal to strive for is a seductive argument but it doesn’t necessarily follow that said championship would be any good. There’s at least an equally good chance that it would be populated by teams who are half-interested, half-motivated and ultimately half-there.

We don’t know if aiming for a ‘B’ All-Ireland would keep a Derry panel any more together than is the case at the minute. Or a Fermanagh one or an Antrim one. Why would it? For years we took it as absolute gospel that the one certainty in GAA life would remain the competitiveness of the Ulster championship. That such was the rivalry up north, so bound up in identity and roots and all the rest, it would survive a nuclear attack.

Evidently, that’s not the case just now. Yes, some weekend soon the Ulster Championship will revert to type. Donegal and Tyrone will be the first heavyweight clash of the summer, Monaghan and Cavan haven’t been separated in championship by more than two points since 1994. And ultimately, the 2016 iteration was rescued somewhat by two drawn semi-finals and a manic endgame to the final itself.

But there’s no getting away from the fact that for the second year in a row, there has been nothing to see up north at the very point in the year when the Ulster Championship has traditionally done football’s heavy lifting for it. There has always been a certain smugness to the Ulster contention that the race for the Anglo-Celt Cup is the only show in town this side of August so maybe it’s no harm for them to discover that it isn’t the be-all and end-all anymore.

In some counties, players worked that out for themselves a good while ago. Who would have thought we’d ever be saying that about football in Ulster?