Should Jim Gavin’s men see off Kerry, Tyrone, Mayo etc what next for the GAA? 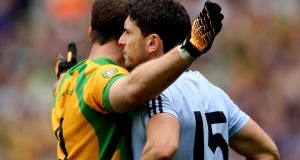 Donegal’s Neil McGee subjected Bernard Brogan to an hour of intense, up close and personal scrutiny in the 2011 All-Ireland semi-final. Photograph: James Crombie/Inpho

Many of us sitting in the Canal Stand on the afternoon of August 28th, 2011 couldn’t really concentrate on the actual All-Ireland semi-final between Dublin and Donegal because we were too busy watching what was happening between Neil McGee and Bernard Brogan.

Once the teams parted ways after the national anthem, the Gweedore man rumbled over to Brogan and the pair exchanged the briefest public handshake on record since Khruskhev and Kennedy came face to face in Vienna.

Before the ball was even thrown in, McGee fronted Brogan but stood with his back to the field so that he was facing the Dublin forward eyeball to eyeball, his hands raised like a high priest – but the kind of high priest who might feature in the visions of Ozzie Osbourne. What followed was an hour of intense, up close and personal scrutiny by the Donegal defender.

It wasn’t so much a question of whether Brogan needed to appeal to the umpires as apply to the courts for some kind of barring order.

“Never seen anything like it in me life,” Brogan would say of that game on television after the Dubs had come through what would become known as the most notorious defensive test of the modern game.

McGee’s defensive work was darkly brilliant that day, but of lasting significance was Brogan’s unblinking patience. He wasn’t fazed and was there, psychologically and physically, to land the point (0-4 out of the 0-8 total) which shook Donegal off.

It’s important to remember what Dublin represented that day: a big team, yes; a boisterous day out in the capital, for sure; but also a nostalgia factory. The best of them seemed wrapped up in the era of Thin Lizzy, chopper bikes and the tarmac’d Grafton Street cluttered with Ford Cortinas.

How many people really believed Dublin had the sand to go and win the All-Ireland that summer and become the urban army that electrified the GAA in the 1970s?

The world of Gaelic football is now six years into an era where Dublin have not just returned as an All-Ireland-winning force but have thrown the ecosystem into chaos.

There is a strong argument to be made that the Dublin the rest of Ireland fear, loathe and admire in equal measure was born that day. The story of Pat Gilroy’s role in the city’s team transformation has never been fully or adequately told and it’s unlikely to be, at least not by the man himself.

After watching his team fall apart against Kerry in 2009, Gilroy memorably likened his team to “startled earwigs.” (And the Dubs had been torpedoed, remember, by Tyrone in the summer of 2008; they were edging towards a label of damaged goods). But two years later, they bolted clear of Kerry in the All-Ireland final and the genie has been out of the bottle since.

Gilroy also introduced the notion of Dublin as corporate entity, with early morning press conferences and a kind of distancing of the team from the public grasp.

Jim Gavin came in and enhanced that culture to an unprecedented degree, inculcating a uniformity of message and language and an inviolable rule of team over individual. It has reached the stage where those of us on the outside can quickly form the impression that Dublin, in full championship flow, makes Google appear like a half-assed operation.

For decades, Dublin’s failure to get their act together at intercounty level was used as a stick to beat them with. They had the population, the clubs, the infrastructure, the tradition and played all their games in Croke Park but were bagging All-Irelands at a rate of one per generation.

Now, the city clubs are thriving and by all accounts oversubscribed with youngsters up for being the next Philly McMahon or Bernard Brogan. Howls of national outrage understandably emanated throughout the country when it emerged the GAA had channelled €1.46 million at Dublin in 2014 in development funding, more than all other counties received.

The perception created by the figure was of Dublin as the Real Madrid of Gaelic games. The criticism of the financial contribution is inevitable but inadvertently denigrates the work and commitment of players like Paul Flynn, Stephen Cluxton and Brogan to elevate their game through graft and incredible hunger.

Right now, opinion is split as to whether Dublin as a force will begin to fade with this team or whether they have already set in motion a system which will facilitate a squad capable of dominating the All-Ireland scene in perpetuity.

This championship seems like the battleground for both those alternatives.

Nobody out there gives Westmeath a snowball’s chance on Sunday. That team huddle in advance of the 2004 Leinster final, when the late Páidí Ó Sé channelled the deities of west Kerry and infused the Midlanders with boldness – “We have to crash into these fellas and test their f*****g pulse” – seems to belong to a state of play which cannot be seen again.

But the national responses to Dublin’s reinvention have been rousing. Kerry’s win in the league demonstrated what many people had begun to disbelieve: that it was possible to beat them. (It must be the first time in the history of the GAA that a Kerry win was seen as a strike against The Man).

Last Sunday suggested that only now is the full vision of Mickey Harte’s masterplan for Tyrone beginning to take shape. Kildare have started their resurgence and there is a sense that whatever happens in Ulster this year will not be leave Monaghan content and that this is their year to burst through their quarter-final glass ceiling.

One of the main intrigues of Sunday’s game is whether Bernard Brogan can reclaim a starting place in a squad teeming with young forwards. His reduced role last summer seemed like a sign of the times; proof that Dublin had superior options even to Brogan. But that’s still unproven.

What Brogan developed into was a kind of one-off: a tall, elusive scoring forward who can, crucially, play with his back to goal and who has developed, through years of being there, an uncanny positional guile for being in just the right place at just the right time.

His mere presence on the field, deep-lying and to the right of the opposition goal, is a distraction and worry for defensive units and managers always have to dedicate a marker to cover him. Brogan’s scores have killed games; ended teams. In the six years since he faced down Neil McGee, Brogan has proven indispensible to Dublin and that remains true this summer. There may be hope here for other teams in that it is not always as simple as bringing new guys through.

The strongest teams out there have recalibrated and reconfigured their approach and thinking to try and reach the standard set by Dublin. There is a sense that a few of the best teams are going to throw everything at the next few months. Tomorrow will be just another day in paradise for Dublin; a parade of expansiveness. But something has to give. Either Dublin will be beaten. Or the others will be forced to accept that their best effort won’t be good enough.

And what if that is turns out to be the reality? That’s the question the GAA must hope does not arise.