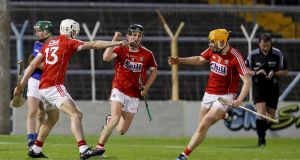 Evan Sheehan goaled from a 20 metre free to salvage a draw for Cork in a gripping Electric Ireland Munster minor hurling semi-final at Semple Stadium on Thursday night.

Sheehan struck in the 83rd minute with the final say of a magnificent encounter that went to extra-time in Thurles.

In a game of so many twists and turns, Sheehan had the final say to ensure that both counties will have to do it all over again on Saturday afternoon at Páirc Uí Rinn, with a 1pm throw-in.

In the second half of normal time, Cork came from six points down to level in the fourth minute of stoppage time, Robert Downey on target.

Tipp looked to have won it when Jake Morris pointed but that man Downey responded again as the sides finished level at 0-16 to 1-13, Ray McCormack on target with the first half goal for the hosts.

Darragh Woods hit 1-4 in extra-time for Tipp but Sheehan struck late to deny them.

Rory McIlroy pleased with first start as he eases into 2020 05:00
Men in Black: The referees for Ireland’s Six Nations games 05:00
Racecourse betting ring rallies in 2019 with increase in turnover 01:00
Niall Quinn and Gary Owens reassure FAI staff about future 01:00
Sizing John set for return to fences in Irish Gold Cup 01:00
Crossword Get access to over 6,000 interactive crosswords