Cavan step it up a gear to advance past Offaly 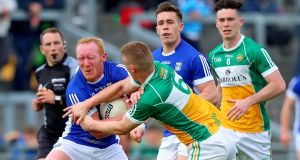 Cavan produced a vastly improved second half performance to book their place in the next round of the All-Ireland senior football qualifiers in Tullamore on Sunday.

The Ulster side looked to be in trouble when they went in leading by just two points at half time after playing with a fairly strong wind.

It looked like two points would be an insufficient lead, especially as Offaly had a lot of quality to come off the bench – including Niall McNamee – but, by the time he was introduced, Cavan had built up a big lead.

Cavan owed a debt of gratitude to their star player, Gearoid McKiernan. Alternating between centre half forward and midfield, he was on fire as he scored 1-4 and was involved in a lot of the good stuff that Cavan produced.

It was his goal eight minutes into the second half that really sealed the win. While Cavan had built up a commanding 0-14 to 0-9 lead at that stage, McKiernan’s neat finish after a Dara McVeety pass gave them the cushion to complete the job.

With nine minutes left, Cavan were still in control as they led by 1-17 to 0-12 but they were forced onto the back foot by Offaly. The home side scored the final four points to get the gap back to four with three minutes of injury time remaining but the goal they needed to make it really interesting never looked like materialising, apart from one half chance that was quickly snuffed out.

It was a deserved win for Cavan, who will have been disappointed with the way they played in the first half. They struggled to get going and they were actually quite fortunate to be ahead by 0-11 to 0-9 at half time.

Offaly had played quite well in the first half as they attacked their opponents. They were 0-4 to 0-2 up after 10 minutes and 0-5 to 0-3 up after 14 before Cavan got three on the trot to edge ahead.

McKiernnan was in flying form in the first half but points from Ruairí McNamee and Graham Guilfoyle put Offaly back in front by the 23rd minute. In a dog eat dog tussle, the lead exchanged hands on a couple of occasions before Louth finished well with points from Niall McDermott and Ciaran Brady to go in with that half time lead.

With the wind to come, Offaly were in a strong position at the break but whatever it was that Cavan manager Matthew McGleenan said had the desired effect. They came flying out of the blocks, taking control with four unanswered points and then McKiernan’s goal.

The half was 11 minutes old before Bernard Allen registered Offaly’s first point and that eight point lead was always likely to be too much to haul in. It proved to be a satisfactory evening’s work for Cavan who finished with 14 men after a late second yellow for James McEnroe. In Offaly there will be plenty of speculation about the future of manager Pat Flanagan who has now completed three years in short.