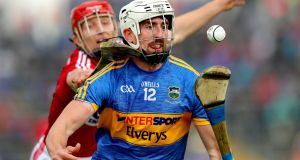 Two rounds in and the Munster championship is turning into exactly the nest of vipers everyone hoped for. Three of the teams have played twice and nobody has won both and nobody has lost both.

Tipperary got out of this one despite being nine points down at half-time and three behind in the 69th minute. Cork went from looking like All-Ireland contenders in the first-half to a side that will have Limerick licking their lips as they head to Páirc Uí Chaoimh on Saturday. Everything is in flux right now.

The bare bones of this one are that Cork and Tipp both got glimpses of the worst of their weaknesses and the greatest of their strengths. Mick Ryan said afterwards that it felt like a win, with substitute Jake Morris knifing the equaliser in injury-time from the first possession of his senior inter-county career. Their championship has been saved, for now. But he conceded afterwards that enough has gone wrong so far for him to be worried about where Tipp are at.

“Well, yeah, is the honest answer to that. I’d love to have four points at this stage but we don’t. We just have to look ahead, we can’t do anything about last Sunday’s result, we came here to try take two points, we went away with one of the two – it’s not bad. There are four to be played for now and who knows? We’ve just got to fight it out as hard as we possibly can.”

For John Meyler, it was both the best hurling of his time in the Cork job and maybe the most worrying. His team had 1-15 on the board here at half-time and were superior to Tipp in every facet of the game. Their puck-outs were better thought-out and more efficiently delivered. Their movement was scattershot and purposeful, their forward line had the Tipp defenders wishing for a quick death.

In that opening period, Daniel Kearney, Seamus Harnedy and Shane Kingston were exceptional. Cork’s dominance was so pronounced that they had seven points on the board before Tipp opened their account with a Jason Forde goal on 14 minutes. By the time Kingston somehow eluded four Tipperary defenders to squeeze home his goal a minute short of the break, Cork’s lead was nine points. To predict a turnaround from that position would have been the height of nonsense.

“I thought some of the hurling we played in the first half was incredible,” said Meyler afterwards. “The movement, the pace, the speed, the scores. But unfortunately we hit eight wides. We started sloppily in the second half – we conceded four, five points on the run and got them back into the game where we needed to shut up shop.

If Tipp were going to get back on terms – and it looked a monumental if when the teams came back out – they needed to burst from the blocks. Noel McGrath had been their sole bright spark in the first half and he picked up in a similar vein after the restart. He pinged a point and shook his fist into the crowd, took a foul for a Forde free and shook his fist again. The Tipp crowd got into it now as their team put up the first five points of the half.

Cork rallied. Conor Lehane got into it with a couple of points, Kearney speared another. By now the space between scores was counted in seconds rather than minutes. John McGrath, who had been anonymous in the first half, started landing scores from all angles. His would end his day with five from play, all racked in the space of half an hour after the break.

When Noel McGrath got in for the second Tipp goal on 46 minutes, Cork’s nine-point lead was suddenly down to three. After Forde, who was flawless from placed balls all day, pointed a 65 in the 51st minute, there was never more than a score between the sides for the rest of the day.

Like a racehorse idling in front, Cork really only knuckled down to their task when Tipp drew up alongside them on the hour mark. Three rat-a-tat points from Harnedy and Kingston (two) pushed them three clear again.

But Tipp weren’t done and it took a phenomenal save from Anthony Nash to keep out a crisp ground stroke from John O’Dwyer late on. Forde pointed the 65 to leave two in it and with time sliding away, John McGrath and 19-year-old substitute Morris got in to level it up.