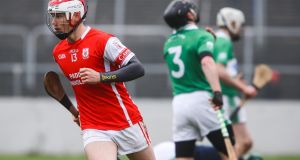 Con O’Callaghan: the UCD student has been in impressive form for Cuala on their march to the All-Ireland semi-final. Photograph: Oisín Keniry/Inpho

UCD have protested to Croke Park about the decision to rearrange the All-Ireland club hurling semi-final between Cuala and Slaughtneil for the same weekend as the Fitzgibbon Cup final.

The Central Competitions Control Committee decided before Christmas that the fixture be pushed back to the end of February in response to a request from Slaughtneil for an extra week between the football semi-final for which they have also qualified, against Dublin champions St Vincent’s, and the hurling.

Scheduled for February 4th, the hurling semi-final has been rescheduled for three weeks later, the 25th, which is the same day as the Fitzgibbon final.

Cuala have a number of players involved with UCD team, Dublin seniors Cian O’Callaghan, who loses a chance to captain the team in a Fitzgibbon final, Colm Cronin and Jake Malone and potentially O’Callaghan’s brother Con, who has been a lethal forward for the Dalkey club on their progress to the Leinster title but is a member of the college football panel.

“There were three options. 1) Play the hurling semi-final a week earlier in January but Cuala weren’t in favour of that, 2) approach St Vincent’s about playing the football semi-final a week later on the 25th or 3) ask Cuala to postpone until the same date.

“Vincent’s couldn’t do it because there is a wedding in the club that weekend and in the end Cuala agreed to play their semi-final on the date in question. Our sympathies are with UCD on this and I can understand why they are unhappy but we simply ran out of dates.”

The All-Ireland club final will be played as usual on St Patrick’s Day, 17th March, which meant that any later date for the semi-final wouldn’t leave time for a replay.

UCD, managed by Tipperary All-Ireland winner and The Irish Times hurling analyst Nicky English, haven’t won the competition for 16 years and are drawn in Group D of the Fitzgibbon Cup along with UCC and UUJ. Two teams qualify and the quarter-finals are on 14th February. Semi-finals and final are scheduled for the Friday and Saturday of the last weekend in February.