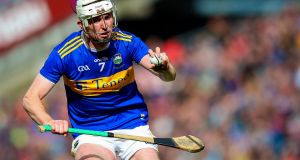 Double Tipperary All-Ireland winner Séamus Kennedy will miss the county’s first match in this year’s championship, the Munster semi-final against the winners of Sunday’s Clare-Limerick quarter-final.

The news was confirmed by county manager Liam Sheedy at a remote media briefing on Thursday evening.

“He’s in a brace. He gave the medial ligament a strain. I think he’ll be out of the brace before the game but he won’t be available I would say for selection, which is unfortunate as Séamie had a long run with Commercials.”

Kennedy, an accomplished dual player, has a provincial club medal with Clonmel Commercials with whom he won another county medal this year.

A great physical presence for the Tipperary hurlers, he has won two All-Irelands at wing back and gave an outstanding display in last year’s key semi-final victory over Wexford when his team were reduced to 14.

There was better news of another All-Ireland winner and former All Star Bonner Maher, who was in terrific form last year before suffering a cruciate injury in the provincial group match against Limerick, which forced him out for the rest of the season.

“He’s going great,” said Sheedy “He’s a great guy. He’s a real warrior. Probably great for him that his club Lorrha made the final stages of the Séamus Ó Riain competition, which was very, very positive for him.

“It allowed him to get pitch action because I think building him up in the club scenario was probably the ideal opportunity for him to get some exposure to real high-intensity games without maxing out.

“The impact that he had on the group in 2019 when he wasn’t inside the white lines was immense really. He just has that natural leadership skills that you want around your squad and it’s great to see him back.”

Finally, he had positive news of another of last year’s All-Ireland winners, John O’Dywer, who has been recovering from an ankle injury.

“John has had a really tough time of it. He was in a boot nearly for four weeks over the course of the summer. Really when you look back since the All-Ireland final last year he’s had very, very limited activity. He’s been really tested by an injury that we just couldn’t get right. The operation has been done and he’s back training really hard.

“I would give the guy huge kudos for the way he has gone about his business for the last four or five weeks because, as I said, that injury really impacted his ability to prepare. But for the last few weeks he’s been superb. He’s coming really strong and it looks like the injury is behind him.”