Chris Crummey thankful for the chance to embrace championship action 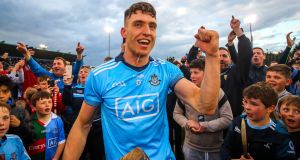 By now there aren’t many people left who still have something to be thankful for as the country moves into the second lockdown also known as Level 5 and for Chris Crummey it goes beyond the continuation of senior inter-county games only.

The Dublin hurling captain spent part of the first lockdown recovering from a broken collarbone, which might have impacted on his championship participation had that gone ahead during the summer. That makes his belated chance at the season even more appreciated.

“There is a slightly different feel with the whole preparation and in terms of all the different protocols that are in place, but we’re very grateful for the GAA and public health authorities giving it the go-ahead.

I’ll play anywhere. Half forward or half back – there are a lot of similarities there between the roles

“At the end of the day it comes down to our families being kept safe and there’s an onus on players to make the call that’s right for them. Every player’s in a different situation with their family and work, life. I can only speak highly of our management team. They’ve been very vigilant with all the Covid protocols and Mattie Kenny [Dublin manager] has been excellent if anyone doesn’t feel comfortable, or doesn’t want to play; he’s left the door open for lads to make up their own mind and he’s been fully supportive.”

Crummey sustained the collarbone injury in Dublin’s league match against Wexford back in February, a few weeks before the country went into the first lockdown. At that point he was in a race against time to be fit for the championship, only now he is and he’s raring to go.

“I would have been very, very tight for the Kilkenny, Wexford games as they were in the space of a week,” he says of Dublin’s original round-robin championship schedule.

“It’s hard to know whether I would have played or not but I would have been close. It was blessing though in that I’m fit healthy and get an opportunity to play Leinster championship this year, as I’d have been touch-and-go back in May.

“I had my operation the week after the injury happened. Then it was a case of time and allowing the bone to heal. You do your remote physiotherapy sessions on Zoom but for my injury it was just a matter of time. Luckily I wasn’t in a rush with the physio over lockdown.”

The 27-year-old from Lucan Sarsfield, though to date playing most of his hurling in defence, featured among the forwards earlier this year, and likely will again on Saturday. The game presents Dublin with the opportunity to make amends for their defeat to Laois in last year’s preliminary quarter-final. There is still the back-door for whoever loses this time.

“That’s where I finished up against Wexford, when I got injured. I’ve been playing for the club in the forwards over the past few months and in recent years. I’ll play anywhere. Half forward or half back – there are a lot of similarities there between the roles.

“You see wing backs getting forward and wing forwards back in their own defence doing donkey work. After playing in the forwards for both club and county it’s more than likely that’s where I’ll be but I’ll play wherever Mattie decides to play me.”

“We’ve already played Laois twice this year, so it’s just really about winning the first match, that championship quarter-final. That’s our sole focus on Saturday. It doesn’t make a difference who we play, we’ve got to find a high level of performance and make sure that’s good enough to get over the line.”

Even with Croke Park empty on Saturday evening bar the teams and stewards and handful of media, Crummey is again thankful for all he’s got.

“I would have had doubts about it (no crowds), before playing club championships, but the majority of teams played behind closed doors without crowds. From my own perspective I thought going into it that it would be difficult, but it really is a case of once the ball is thrown in and you know it’s championship and what’s at stake and on the line and the pitch itself has a very similar feel to it, you know the intensity is going to be different.

“I expect that to be the same on the intercounty scene as well. Having no crowd makes it different from a spectator point of view but from a playing perspective you’re concentrating solely on your role once the ball is thrown in, crowd or no crowd.”