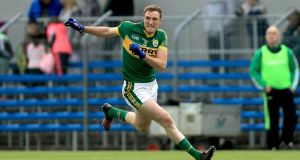 Kerry’s Brendan O’Sullivan was handed a suspension of just 21 weeks after a positive test for the banned stimulant methylhexaneamine that he claimed was contained in fat-burning supplement. Photograph: Donall Farmer/Inpho

It’s come too late for Kerry footballer Brendan O’Sullivan but the Food Safety Authority of Ireland (FSAI) have recalled the entire range of Falcon Labs food supplements after discovering they contain traces of stimulants and steroids, which although not listed on the product packaging, are both banned in sport and also carry a risk to health.

The FSAI were also unable to trace the exact source of the products, although widely available online and in select vitamin shops in Ireland.

Last year it emerged that O’Sullivan had failed a Sport Ireland anti-doping test, going back to April 2016, which he later blamed on the consumption of the Falcon Labs fat-burning supplement Oxy-Burn Pro, one of the products now identified by the FSAI for containing traces of the stimulants and steroids.

It resulted in O’Sullivan’s positive test for the banned stimulant methylhexaneamine (MHA), for which he served a reduced suspension of just 21 weeks, having made a case to Sport Ireland that he inadvertently consumed the banned substance.

Earlier today the FSAI announced a total recall on all Falcon Labs products: Oxy-Burn Pro, which on the packaging claims to be made in Cyprus, is among them.

“Some of the products which tested positive for us are called Falcon Labs Oxy Burn Pro, Falcon Labs Superclen, and another product called Superdrive,” Ray Ellard, director of risk management and regulatory affairs at the FSAI, told the RTÉ Radio News at One.

“But there are other products under that brand, and we are suspicious about them all, because we also can’t find where they are manufactured. And they have stimulants and steroids in which have no place in food.”

When asked how widespread these products are in gyms, etc he said: “They are available online, and they are available from some vitamin shops and gyms. So we’re advising people if they have them, first of all, don’t consume them, don’t buy them, and if you’ve been taking them for fat-burning reasons or muscle gain or just as part of your sports regime we’re saying again please don’t use these. And if you do know where they are on sale we would like to now.”

In Sport Ireland’s full reasoned decision regarding O’Sullivan’s case, which identified Oxy-Burn Pro as the product which returned the positive test he explained that he took the supplement for fat-burning reasons. He asserted that it was a “contaminated product” as defined in the Irish anti-doping Rules, because MHA was not disclosed on the label or in a reasonable internet search which he asserted he had carried out before taking the product.

Sport Ireland accepted that it was a contaminated product case, and that he “bore no significant fault or negligence and specified a sanction of seven months which it considered appropriate”.

Falcon Labs brand Oxy-Burn Pro Superthermotech is a supplement sold in capsule form which claims “can dramatically improve the rate in which body fat is burnt as well as providing a huge increase in explosive energy levels”.

He returned the positive sample after Kerry’s league defeat to Dublin on April 24th 2016, and while O’Sullivan admitted the offence, he then appealed the already reduced suspension of seven months. On further appeal to the Sport Ireland Anti-Doping Disciplinary Panel, they imposed a period of suspension of just 21 weeks.

Sport Ireland has repeatedly warned against the use of all food supplements which don’t carry batch-tested guarantees of their sole source of ingredients, plus the source of origin.

There was a single positive test, still pending, which the individual’s sample was found to contain a banned substance. O’Sullivan was one of the pending cases for 2016, as was Olympic boxer Michael O’Reilly, who received a four-year ban after returning a positive test on the eve of the Rio Olympics, which he also blamed on the use of a contaminated supplement.