Moments of the year: Joe Cool when everything was on the line 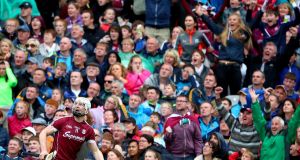 It’s a terrific picture: Joe Canning has hit a winning point from virtually the first row of the Cusack Stand in the last seconds of injury-time to nudge Galway into both the lead and the All-Ireland final.

He’s looking after the flight of the shot with a spreading, beaming look of delight, as he realises that he’s pulled it out of the hat.

There was initial debate about who deserved to win Hurler of the Year. Immediately after the All-Ireland, the Sunday Game panel opted for Gearóid McInerney and there were persuasive arguments for Jamie Barron’s dazzling year with Waterford.

As time went by, though, the consensus settled around Canning, reflecting how, from a teenage prodigy scoring 2-12 against Cork in his second championship appearance nearly 10 years ago, he had symbolised the claims of Galway: massively talented, sometimes struggling with consistency but there to challenge every year.

They couldn’t over-rely on him but he was needed all the same. This year had its ups and downs. Injured in the Leinster final against Wexford he played on without doing himself justice. Subdued in the first half against Tipperary, he proceeded to score all of Galway’s points in the last half hour, including the winner.

Johnny Coen was lively enough to be on the ball in the 74th minute and smart enough to know that penned in on the sideline, there was only one man for the job.

The soaring shot lifted the winning point over the bar and Galway above the insecurities of a nerve-wracked match and onto the threshold of history.

It was within days of the semi-final victory that the word spread about Tony Keady. The bulwark of the back-to-back All-Ireland wins in 1987-88, All Star centre back and Hurler of the Year, was rushed to hospital but died almost inexplicably prematurely at the age of 53 despite being in apparently good health.

So, in the extreme emotion of the moment last September, Galway hurling had the sombre task of remembering as well as celebrating. In the sixth minute of the final, a round of applause rippled through the crowd to commemorate the star of Galway’s previous win in 1988.

Then in his captain’s speech David Burke invoked the memory of 2012 finalist Niall Donohoe, whose suicide a year later had shaken the county and whose cousin, Conor Whelan, lined out for the county, as they closed the book on a 29-year wait.