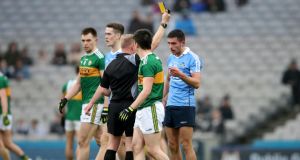 Referee Ciarán Branagan shows Dublin’s Niall Scully a yellow card during the Allianz Football League Division 1 match against Kerry, He received a second yellow later on in the game and was sent off. Photograph: Bryan Keane/Inpho

Four of the six counties still in contention for the All-Ireland football championship contain a player who is one black card away from missing a semi-final, or final.

Any player who receives three black cards within that year’s league and championship campaign, three double yellow cards, three instances of a black card following a yellow card in a match, or any combination of the previous three will be suspended for one match.

That suspension could see them miss a semi-final, a final, or the start of the 2019 season as these bans do carry into the following season. There is no special pardon for an All-Ireland final or replay.

Ahead of this weekend’s final round of the inaugural Super 8s then, and Dublin, Kerry, Monaghan and Galway are all in danger of losing a player to suspension. While Roscommon and Kildare go into the final weekend knowing that they cannot progress – they’ve received a combined 18 black cards already in 2018 – any lapse from Eoin Doyle, Paddy Brophy or Fergal Conway of Kildare, or David Murray of Roscommon and they will miss the start of next season.

Dublin’s Niall Scully was double yellow-carded twice during his team’s victorious league campaign and, having started every game for the reigning champions this summer, manager Jim Gavin will have him warned not to let his discipline drift for a third time.

Gavin Crowley has yet to feature for Kerry in this year’s championship, but the 23-year-old defender received a yellow and a black card against Mayo last February and a double yellow against Donegal before that.

Barry Kerr received a black card in Monaghan’s qualifier win over Waterford, which followed a double yellow card back in January against Mayo in the league.

Seán Andy Ó Ceallaigh has been a revelation at fullback for Galway this season, delivering on the promise he showed during the county’s journey to last year’s under-21 final. He received two black cards during the league. All four players are one cynical foul away from a very costly suspension. On this date last year the same list included 11 players walking a black card tightrope.

In all there have been 61 black cards in 61 championship matches so far this summer. That’s the lowest championship average since the rule change was introduced in 2015.

From the remaining teams in the championship, another 27 players are on strike one, knowing that they will likely miss an All-Ireland final if they were to pick up two more black cards or another of the relevant combinations. Already this year, two players have been suspended for an accumulation of cards, Down’s Kevin McKernan and Wicklow’s Seanie Furlong. Both of their suspensions will follow into the 2019 season.

Seven of those came in the final match of their team’s campaign, meaning the player served their suspension in the following season. Michael Murphy’s ban was served during the same 2015 league campaign in which he was dismissed on three occasions, and the other three instances were all served before the respective second rounds of the qualifiers had passed.

At the other end of the scale, Carlow had just one black card in 12 matches, Laois received two black cards in six league matches and five more games this summer, and Tipperary had one in 10. Dublin, Kerry, Donegal and Tyrone are among the 10 teams to have received no black cards so far in this year’s championship.

As for the referee who has handed out the most black cards, that’s Cavan’s Noel Mooney. He’s shown nine cards in three matches. The next highest is Meath referee David Coldrick, and he’s shown six, however that’s across nine matches (the referees to have overseen the next highest amount of matches are Maurice Deegan and Conor Lane who have been in the middle for five matches).

While the black cards are on the decline, there have been 17 red cards already this summer. In last year’s championship only 11 were shown, the year before there were 13, and the year before that 12. Four of the 17 were shown by Cormac Reilly, two by Coldrick and two by Paddy Neilan.

With a guaranteed seven games remaining this year, all those with marks over their names must be extra careful not to become the first major casualty of the black card suspension rule. While all concerned need to be wary of an even more costly straight red card.