Limerick make no mistake against Carlow 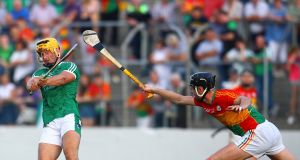 First-half goals from Kyle Hayes, Graeme Mulcahy and Aaron Gillane set Limerick on their way to victory and into the All-Ireland quarter-finals for the first time in four years.

Home side Carlow were not able to muster another huge performance six days on from their Joe McDonagh Cup victory, but Colm Bonnar’s side finish the season with plenty achieved and much to be positive about.

It only took Limerick 30 seconds to take the lead when William O’Donoghue sent Hayes in on goal and he buried his low shot past Brian Treacy, but following that early boost there was no immediate kick from John Kiely’s side.

Instead it was the home side who began to settle and with John Michel Nolan, Paul Cody and Edward Byrne on top in the half-forward line they pulled within two points as Denis Murphy and Byrne found the target.

But while Limerick were struggling, Carlow were unable to make the most of their dominance and had reeled off six wides by the 20th minute.

Tom Morrissey hit a great score for Limerick in the 12th minute, which he had to fight hard for, but it was a key score for his side as they then began to show their usual free-flowing hurling.

Mulcahy and Gearoid Hegarty hit points for the Munster outfit, and after 19 minutes their second goal arrived when Gillane’s quick pass sent Mulcahy in on goal and he finished at the second attempt, following a fine Brian Tracey save.

Goal number three came a minute later, this time Hegarty picked out Gillane with a pinpoint pass, and the Patrickswell man arrowed his shot into the top corner from a tight angle.