Roscommon take their place at the top table 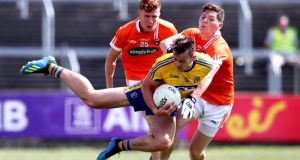 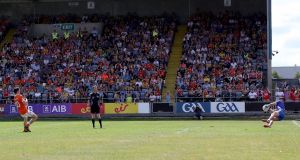 Roscommon booked their place in the inaugural Super 8s after a blistering win over Armagh on Saturday afternoon.

Enda Smith’s injury-time goal added polish to an impressive score-line in what was an enthralling game played in soaring heat and at breakneck speed at O’Moore Park.

Roscommon led by two points after a thrilling end-to-end opening half in which the teams exchanged tit-for-tat scores, picking off several beautiful long range points and it was Donie Smith’s 28th minute goal that made the telling difference for the Rossies at the break.

Roscommon started like a house on fire and Cathal Cregg should have bagged an opening minute goal only to be denied by Blaine Hughes who pulled off a stunning save. Nevertheless, it was a warning of things to come.

The Orchard men established a two-point lead, 0-5 to 0-3, after 10 minutes with Aidan Forker, Jemar Hall, Andrew Murnin (0-2) and midfielder Stephen Sheridan on target while Roscommon responded through Ciaran Murtagh (0-2) and Cathal Gregg.

And when they drew level through scores from Donie Smith and Ciaran Murtagh Roscommon looked set to take control. Instead it was Armagh who pushed ahead with Rory Grugan kicking from long-range and then Murnin steering over after a one-handed catch.

Another Grugan free extended Armagh’s lead but, as expected, Roscommon stormed to half-time with the elusive Donie Smith and powerful Gregg taking charge.

Diarmaid Murtagh and Armagh’s Niall Grimley and Grugan exchanged points before Donie Smith set up his brother Enda to fire into the net from close range. And Ciaran Murtagh followed up with a rally of points to give Roscommon and 1-11 to 0-12 lead.

Roscommon pulled away from Armagh early in the second half as Gregg and Ciaran Murtagh kept the scoreboard ticking over.

Armagh needed a goal but Grugan’s penalty kick was saved by goalkeeper Colm Lavin, although Mark Shields did hit the net on 45 minutes to close the gap to two points.

Still, Roscommon possessed that little more cutting edge up front where Diarmaid Murtagh was immense. And while Grugan was denied another penalty shout there were few complaints when Smith delivered the late, late knock-out blow.