Limerick hope under-21 win can lay foundations for senior success 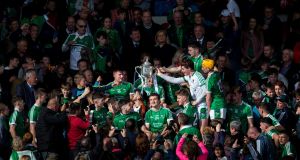 Limerick players celebrate with the cup after beating Kilkenny in the All-Ireland under-21 hurling final at Semple Stadium. Photograph: Cathal Noonan/Inpho

It’s 19 years since Kilkenny last went consecutive seasons without winning either the senior, minor or under-21 All-Ireland titles, but after a chastening defeat to Limerick in Saturday’s All-Ireland under-21 final Eddie Brennan still believes his side can help the record winners back to the top again.

There was no denying Limerick their sweet revenge following defeat in the corresponding minor final three years ago, but the power, poise and skill displayed by the Munster men hinted at a big gulf between the sides.

On their way to the final Pat Donnelly’s side accounted for Tipperary, Clare, Cork and Galway, while Kilkenny’s five point win over Dublin in the Leinster quarter-final was the toughest test Kilkenny had received.

But Brennan is pleased that a first Leinster title since 2012 means progress for his side, and that the future is not as bleak for his senior colleagues as might be suggested.

“It’s probably because of the benchmark and the level the Kilkenny seniors have set over the last 10 or 12 years, and I’m conscious of saying that in a team that I played in. It’s not an ego thing. It’s just that was the benchmark that was set,” said Brennan.

“Every team was chasing you down for years and years. Now it’s just a case of a lot of teams levelling off, being around the one level.

“I don’t think Galway are that far ahead of everyone else either. They were the team to beat this year. They were strong. Very, very good all year around. But a lot of people probably felt Waterford didn’t play to their potential.

“It’s exciting in a way for 2018. It can’t come quick enough. Like everybody else, Kilkenny are back to the drawing board. Work again.

“A lot of them guys out there who played for me are good enough. They may not have showed it today but it’s character building, it’s a test of their resilience, a test of what’s between their ears and what do they want.”

But forget about Kilkenny’s woes; this was Limerick’s day. The thousands of green shirted supporters that poured on to Semple Stadium after the full-time whistle showed what a sixth title meant to the county, but the stylish, power hurling that they produced shows they are doing something right on Shannonside.

On Saturday Limerick used the strong wind to their advantage in the first-half and built up a seven-point lead, while they kept pace with Brennan’s side after the restart and never looked threatened.

Once again Aaron Gillane was their score in chief with seven points, five of which came from play, while Kyle Hayes mopped up at the back, Robbie Hanley was a colossus in midfield and Peter Casey caused huge trouble up front.

In the end the lead built up by the 16th minute when Limerick were 0-7 to 0-1 ahead was the difference, but Kilkenny’s inability to turn up the pressure on the winners straight after half-time ultimately saw their spirited comeback fall well short.

Limerick’s manager, Donnelly, says the foundations have now been laid for his county to launch a crack at senior All-Ireland glory as they seek a first title there since 1973, but that there is no guarantee that their recent underage success will transfer over to the top level. But he is cognisant of the fact that Limerick have to play a long term game.

“If you go back over the years and look at the player profiles on All-Ireland senior final day, they all have minor, under-21 and Fitzgibbon medals. All our lads have them now so there is no reason why Limerick can’t go on and be successful at senior level,” said Donnelly.

“The foundation is there. These are lads that will play with confidence. Minding them for the next couple of years is the big thing.

“We won under-21s before in the early noughties. The lessons have been learned from then. These lads will keep their feet on the ground.