As in the men’s final, Mayo play Dublin, thanks to Cora Staunton’s tally of 1-9 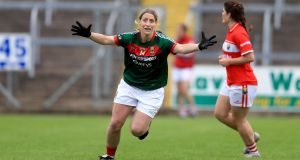 Mayo’s Cora Staunton celebrates at the end of the game. Photograph: Donall Farmer/Inpho

The Westerners washed away a year of hurt with a thrilling victory over the seven-in-a-row chasing Rebelettes at Kingspan Breffni Park.

Staunton bagged 1-9 as Mayo made up for last year’s heartbreaking one-point semi-final defeat to Dublin at the same venue - to reach a first Brendan Martin Cup decider in 10 years.

For Cork, it’s their first defeat in the All-Ireland series since the 2010 quarter-final loss to Tyrone - but their third of the season following losses to Kerry and Waterford in the Munster championship.

For Mayo, it’s been a remarkable turnaround since their Connacht final loss to Galway on July 2nd - and they’ll now meet Dublin on September 24th for national silverware.

Mayo survived the loss of Fiona Doherty to the sin-bin for a 10-minute spell in the second half to edge home.

Orla Finn scored 13 points for Cork but the Rebelettes couldn’t find a crucial goal to ask real questions of Mayo. They had a glorious chance when referee Niall McCormack adjudged that Finn was fouled by Yvonne Byrne with four minutes left.

But the Mayo goalkeeper saved the resultant penalty from Eimear Scally when a goal would have put Cork a point clear.

Finn’s 11th free of the afternoon cut the deficit back to just a point but in the 59th minute, Staunton put over what would prove to be the insurance score.

Cork boss Ephie Fitzgerald decided to take off 2016 Player of the Year Bríd Stack, who’d carried a hamstring injury into the game, with eight minutes left. And the 11-time All-Ireland senior medallist was visibly distraught at full-time as she raced down the tunnel.

Cork died with their boots on however, but this was Mayo’s day and they’ll have the chance to claim just a fifth All-Ireland senior crown in three weeks’ time.

The first half was level five times, with goalkeepers Byrne and Martina O’Brien excelling with some brilliant saves.

It was a first half shoot-out between Finn and Staunton - as the Cork forward collected seven points (six frees), with Staunton registering 1-6 (two points from frees).

Staunton struck for a goal in the 25th minute, getting away a left-footed strike that O’Brien got a hand to, but couldn’t keep out.

Earlier in the half, O’Brien had denied Grace Kelly and Ciara Whyte with fine saves, while Byrne was on hand to stop Niamh Cotter’s 17th-minute effort.

And after Staunton’s goal, Byrne produced another vital save from Áine O’Sullivan, to help Mayo lead by 1-7 to 0-8 at the break.

But two quick-fire goals swung the pendulum back in Mayo’s favour - Aileen Gilroy taking a pass from Doherty to slam a shot past O’Brien in the 42nd minute, before substitute Amy Dowling netted with her first touch midway through the second half.

Dowling came on to replace Rachel Kearns and she made an immediate impact - palming the ball home from a tight angle after Sarah Rowe’s point effort dropped short.

That score put Mayo four points clear - 3-9 to 0-14 - but Cork kept on battling and could have had an elusive goal with 11 minutes left.

Áine O’Sullivan looked certain to raise a green flag but she skied an effort off the upright and the ball rebounded to safety.

Cork had now pushed right up on Mayo’s restarts and there were some nervy moments for manager Frank Browne to endure before full-time.

Staunton missed a straight-forward free by her standards down the home straight but Mayo had a let-off when Byrne stopped Scally’s poorly-struck penalty.

Fittingly, it was Staunton who would have the final say with a late point to seal the deal. And for Browne, the wheel has very much come full circle, as he was also manager in 2007 when Mayo fell to Cork in the final.

A decade later, a season that’s brought Mayo back to Croke Park could have a much happier ending.

And the scene is now set for Dublin and Mayo to battle it out for senior glory in the men’s and ladies grades.