Smaller bags permitted but may be subject to searches, fans urged not to bring bags at all 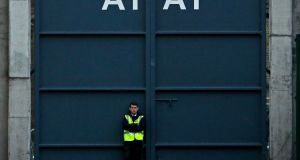 As of this weekend, patrons will no longer be permitted into Croke Park with backpacks or large bags of any description.

Plastic bags which are A4 or less are also permitted, although the GAA have told fans “to avoid lengthy queues, we strongly advise you do not bring a bag.”

On Monday morning the GAA announced the security changes, which will come into effect for Dublin and Westmeath’s Leinster football semi-final on Sunday.

The GAA statement reads as follows:

“Following a review of safety procedures with the relevant statutory authorities, Croke Park can confirm that as of Sunday June, 25th 2017, patrons will not be permitted to take large bags and backpacks into the stadium for all match day and concert events.

“Smaller bags will be permitted but may be subject to searches and patrons are urged not to bring bags at all where possible. We would like to thank our patrons in advance for their cooperation with this matter as we look forward to a fantastic season of concerts and matches in Croke Park over the coming months.”