Just no room for Will O’Donoghue in All Stars team

Virtually no hard-luck stories this year, because who could you leave out? 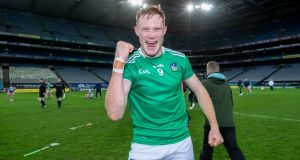 The closest-run decision was apparently the one which left Limerick’s Robocop midfielder Will O’Donoghue as the odd man out. Photograph: Morgan Treacy/Inpho

We can presume that the various Zoom meetings of the All Star hurling selection committee were relaxed affairs. The XV they have arrived at in February differs only in formation to the one chosen by The Sunday Game panel on the night of the All-Ireland final in mid-December. The consensus top 15 hurlers in the country then are the consensus top 15 now. There are virtually no hard-luck stories.

The closest-run decision was apparently the one which left Limerick’s Robocop midfielder Will O’Donoghue as the odd man out. But while he was unquestionably terrific through the championship, could you hand-on-heart have excluded any of the other candidates around the middle third?

Tony Kelly made the shortlist for Hurler of the Year despite going out at the quarter-final stage so he was nailed on. You could make a plausible argument that O’Donoghue outplayed Jamie Barron in both the Munster and All-Ireland finals but the award is made on a season’s body of work and Barron was electric most days Waterford togged out, especially in the comeback against Kilkenny.

The all-Limerick half-forward line was virtually a done deal before a ball was pucked in the final - and then they pucked just about every ball between them in it so even if you wanted to gerrymander O’Donoghue in there somewhere, there was no room at the inn.

All in all, O’Donoghue was unlucky to miss out but it feels like a tough one about which to gin up any serious degree of outrage.

The 2020 hurling selection carries a few quirks and oddities worth noting, for the second year in a row, the goalkeeping award goes to a player emulating his father. For Brian and Ken Hogan in 2019, see Tommy and Nickie Quaid this time around. And of course Quaid’s uncle Joe won a pair of All Stars in the mid-90s, also at goalkeeper.

In winning his fifth award, Daithi Burke joins Pete Finnerty, Joe Cooney and Joe Canning as the most decorated Galway players in the 50 years of the awards. TJ Reid’s fifth award puts him behind only Henry Shefflin (11!), Tommy Walsh (9), DJ Carey (9), Noel Skehan (7) and JJ Delaney (6) on Kilkenny’s list. Tony Kelly is the first Clare player to add to his first All Star since Davy Fitzgerald won his third in 2005.

Ultimately, however, this selection was about Limerick’s dominance of the championship. Had O’Donoghue been included instead of Barron, it would have pushed the Limerick quotient to an unprecedented 10 players - even the great Kilkenny team that ate the championship whole in 2008 were only furnished with nine All Stars. Seán Finn becomes the first Limerick hurler to put three All Stars back-to-back-to-back since Gary Kirby did it in the 1990s. Tom and Dan Morrissey emulate Ronan and Padraic Maher from last year as brothers appearing on the same All Star team.

Finally, a word for Eoin Cody, who makes it a second year in a row that the Young Hurler of the Year award has gone to Kilkenny. Having gone through a 12-year barren spell prior to clubmate Adrian Mullen’s win in 2019, it at least says something good (for now) about the much maligned Kilkenny conveyor belt.

West Ham dispatch Leeds as Champions League dream grows 22:14
Matt Doherty slowly growing into life at Tottenham 21:37
Decision on overseas fans at Olympics expected later this month 20:45
Chelsea’s resurgence continues as they brush past Everton 20:29
Mullins string in fine fettle as they notch up a Leopardstown treble 20:25
Crossword Get access to over 6,000 interactive crosswords