GAA would be better served avoiding a media partnership with Amazon 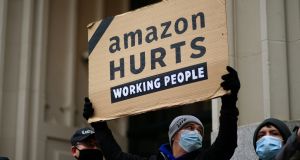 I’ve never seen the archive of the GAA’s official financial books but I’d imagine they are the accountancy equivalent of the Book of Kells, ornate and beautifully rendered and every single element, down to the profit/loss ratio of selling Pink Snacks at 57p rather than 55p at the ’88 Connacht final, lovingly detailed.

They are works of art, in other words, requiring nothing more than a clean ledger book and one of those plastic four-nibbed biros with green, red, blue and black ink.

But prudent as the GAA are, the pandemic has caused an inevitable reversal of fortunes, with a deficit of €34 million for 2020. Forecasts for 2021 aren’t much better and the GAA have let it be known that they’d be “knocking on the Government’s door” to help fund whatever sort of season that goes ahead.

Still, the mood from HQ was upbeat, with optimistic predictions about the earning potential for screening rights to the All-Ireland championships. It was casually mentioned that among the broadcast behemoths in the mix for a slice of Derry v Fermanagh in Brewster on some dreamy, faraway and soaked May Sunday is none other than Amazon Prime, brainchild of one of the world’s richest hombres, Mr Jeff Bezos.

Even in these addled days of lockdown, the idea of Jeff Bezos and the GAA partnering up provided a sharp – which is to say dystopian – contrast. It would be a notional alliance, of course: nobody is expecting to see Bezos handing out the player of the year award to some coiffed and beaming Dublin star at a future gala event. But it nonetheless provoked the constant nagging background question about the GAA. Where is the whole show, you know, going?

The evolution of the GAA’s relationship with the screening of games is fascinating; an utter U-turn over the past three decades as commercial potential allied to public appetite has created the scenario where all broadcasters, including State-broadcaster RTÉ, bid for the rights. There was a significant wave of discontent and unease when the GAA agreed a deal with Sky Sports in 2014, which has seen a significant number of high-profile championship games shown exclusively on the Murdoch TV outlet.

The old argument about whether the GAA, an organisation that benefits handsomely from Government funding, should sell the All-Ireland championship to the highest bidder, blew itself out and life went on. But that debate comes under a hotter light with the notion of Kilkenny v Tipp live on Amazon.

As an exercise in capitalist success, Amazon is a phenomenon. In just 25 years, it has ballooned from its humble garage-warehouse-bookshop origins to its current place as the second largest private employer in America (Walmart is first).

When it went public in 1997, shares cost $18; they now stand to $3,300. Its wildly successful e-commerce model has had the affect of swinging a wrecking ball through the old bricks-and-mortar tradition of retail – or what we quaintly think of as ‘shops’.

In a long magazine piece on the subject of Amazon’s unstoppable rise, Tim Wu, a law professor at Columbia, gave a bleak synopsis of how it works.

“Amazon is a micro-economist’s wet dream. If you’re a consumer, it’s perfect for maximizing the efficiency of finding what you want and getting it as cheap and fast as possible. But the thing is, most of us aren’t just consumers. We’re also producers, or manufacturers, or employees and we live in cities where retailers have gone out of business because we can’t compete with Amazon, and so Amazon kind of pits us against ourselves.”

The brutally impersonal and harsh working environments for employees on the Amazon warehouse floor is only a Google search away. A photograph of protesting staff at a Minnesota plant, in which one held up a rough sign declaring “We are Humans Not Robots” said it all. The environment is ruthless. Move or be gone. Robots take maintenance: you can just fire people. It’s easier for us all not to think about that when we click buy on that vase, that book, that set of dumbbells.

Everyone can see that e-commerce giants like Amazon are gobbling up the world. It was reported in January that Amazon are looking into setting up a distribution centre on the outskirts of Dublin, a development that would allow us even speedier delivery of stuff we think we need while avoiding the post-Brexit customs charges.

But it’s an ominous development for independent retail businesses here. It will be announced by our good folk in Government as a signal of strength in the Irish economy. But, of course, it’s like a farmer housing an alligator in his chicken coop.

Should the GAA care about any of this? Should their interest extend beyond getting the highest bidder to sign on the line that is dotted?

That depends on the increasingly complex question of what the GAA is for. Only a curmudgeon could deny the shimmering health of an amateur sporting organisation operating at the scale it does. The GAA has thrived as an amateur community organisation by modelling itself as a canny operator in the world of corporate sport. And Amazon is a potential customer.

It’s not an easy time for the GAA. But with no games to run, this might be a good time for its financial wing to log on to Amazon and see its banner-boast that they ship 45 million products around the world. And ask themselves this.

Does the GAA really need to become part of the most miserable supermarket on earth? Or are they just that little bit above all that grubby commerce?

Everton edge Southampton; Gordon Elliott hit with interim British ban 07:27
Owen Doyle: Calamity in Cardiff is hard to get your head around 06:00
Budd Schulberg: The screenwriter who made Marlon Brando a star 06:00
Jack Conan makes an impact as he returns in Rome 06:00
Gerry Thornley: Wales have the momentum to claim Grand Slam 05:00