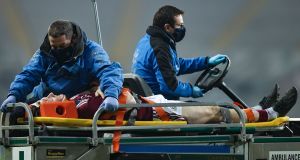 Joe Canning was discharged from hospital on Sunday night and is recovering at home in Galway from a suspected concussion.

The 32-year old was taken to the Mater Hospital in Dublin after being stretchered off in the closing stages of Galway’s 0-27 to 0-24 All-Ireland semi-final loss to Limerick.

He suffered the injury in a heavy collision with teammate Joseph Cooney and play was held up for several minutes before he was removed by stretcher and taken to the nearby Mater.

The 2017 Hurler of the Year was assessed and treated at the hospital but was not detained overnight. He returned to Galway and is recovering there.

“It’s not just our county that wishes him a speedy recovery, he has the goodwill of all the country after all he has achieved.

“It was a terrible pity what happened on Sunday but these things can happen in such physical games. Joe was playing so well, the four sidelines he landed were just unreal and who knows what would have happened had he stayed on?

“It’s the same about Cathal Mannion. He was a huge loss to us when he got injured, he was playing so well all year.

“But it wasn’t to be for us and we can do is hope that Joe and Cathal are back on their feet soon and wish Limerick and Waterford the best of luck in the final.

“We would also hope that Aaron Gillane is fit for the final. Injuries are part and parcel of hurling, especially a game as tough as Sunday, but you’d hate to see a player miss a big match and we wish Aaron a speedy recovery as well and hope that he can play against Waterford,” said Kearney.