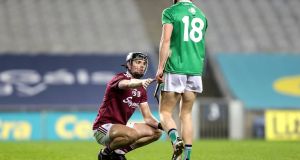 There was one break from recent tradition. For the past two years, we’ve walked out of Croke Park on the Saturday evening of the All-Ireland hurling semi-finals and said that the next day won’t be a patch on what we’ve just seen and we’ve been wrong. This time we weren’t.

The second day was a disappointment because once the first quarter was over, Limerick looked capable of kicking on and winning decisively but they never did. There was also the worrying sight of Joe Canning having to be stretchered off after a bad collision.

During the match he proved again his outstanding marksmanship with four sideline cuts, to go with eight frees. In the immediate aftermath there was no word on his condition and I’d like to wish him well and a speedy recovery.

In the end over two days the established form line held. That has been carried by Limerick and Waterford and it was no surprise to me that those two teams will contest the final in a fortnight.

Starting with Saturday, it was a remarkable game. At half-time I was questioning the evidence of my eyes the previous week when Waterford had looked so impressive against Clare. Seven days later and they were ponderous, their touch was so poor that I couldn’t see Kilkenny not winning and getting a couple more goals.

The misgivings about Waterford were that they’d tire and that appeared to be happening; that they would be leaky in defence and punished for it, as they were when Conor Prunty’s touch let TJ Reid in and when a long ball over the top left Richie Hogan in behind the full-back line.

How do you fix dead legs and all that go with them, like hesitancy and fumbling? It’s very rare to be able to re-energise a team that looks that down and out. After half-time it looked like the teams had swapped jerseys. That requires not just fitness but mental strength.

The break was obviously important for Waterford. After the match Stephen Bennett was talking about the anxiety they had felt to do well in Croke Park against Kilkenny and how all of the shortcomings in their game were only processed at half-time.

There may have been an element of “let’s not leave here with our tails completely between our legs”, but they were transformed and powered into it.

Calum Lyons had been good at wing back in the first half, trying to keep the ship afloat, and getting scores but his anxiety levels were also high and he missed a rise at one stage and conceded a point.

After half-time the other half backs, Kevin Moran and the Tadhg de Búrca, stood up and with Shane McNulty driving forward from corner back they started to fire. It caught everywhere. Jamie Barron made inroads through the middle. Stephen Bennett’s goal confirmed that it was all possible. He had a lot to do after a very middling pass from the otherwise outstanding Jack Fagan.

It went from damage limitation to damage infliction and Kilkenny were in tatters. Austin Gleeson and Bennett were dominant and Dessie Hutchinson was getting a decent supply at last and turning the screw on Conor Delaney.

You could almost feel the team’s hunger and desire and their extraordinary fitness levels sustained what was almost a consistent second-half assault. The running of Fagan and Jack Prendergast and Barron was like a force field and Kilkenny had no answer apart from TJ Reid, whose resistance was unbelievable: winning puck-outs, frees and converting them.

Waterford will be hard to beat.

Maybe Limerick were inhibited by their fate against Kilkenny in last year’s semi-final but they looked docile in the opening exchanges and without being scintillating, Galway found themselves five up.

Then after the first water break they reverted to type, making mistakes, turning over ball and conceding cheap frees. I felt they labored all the way through apart from the exhibition of sideline cuts from Canning and at the end Fintan Burke.

The Munster champions were at times treading on thin ice, shooting the wides that had sunk them in another year – even Cian Lynch, who’s hardly hit one since then. If there was a tactical variation, they appeared to be taking on goals rather than going for simple points on offer.

It was more ambitious but because of Éanna Murphy’s exceptional shot stopping it proved pretty unproductive although too many easy scores came off his puck-outs.

It should concern John Kiely that his team had such ample opportunity to put Galway away but were still tied deep in injury-time. I know semi-finals are for winning but for me it’s a worrying sign that on the form line through Tipperary and Galway, Limerick look to be slightly regressing – or at least not to have improved since beating Tipperary so comprehensively – while Waterford have been improving all the time.

We do know though that Limerick have a high ceiling. This year’s All-Ireland final is going to be a brilliant conclusion to the strangest of years.