After a misfiring first half, Déise overpower their traditionally dominant neighbours 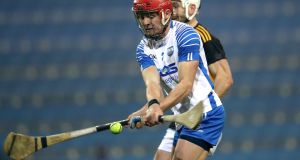 Waterford’s Darragh Lyons scores a goal in the All-Ireland SHC semi-final between Waterford and Kilkenny at Croke Park on Saturday. Photograph: Bryan Keane/Inpho

On Saturday night Waterford emerged from the shadows – literally – of a misfiring first half to defeat their traditionally dominant neighbours at Croke Park for the first time in 61 years. It was also the first time they had secured back-to-back championship victories in the fixture, having beaten Kilkenny in the 2017 qualifiers.

Overturning a seven-point half-time deficit, which quickly became eight on the restart. Having the mental strength to rediscover their A game under the unique pressures of facing Brian Cody’s Kilkenny. And possessing the athleticism to run the “third week syndrome” out of their legs as the match progressed.

None of this looked apparent when the match got under way. Waterford’s touch was poor, as if they were short of practice rather than playing a third sudden-death championship fixture in 14 days. They struggled to get the ball where they wanted it and to keep up with Kilkenny’s precise striking that quickly gave them scoreboard initiative.

Dilatory defence cost them two goals after Richie Hogan got in behind the cover and, although Stephen O’Keeffe redeemed his hesitancy off the line with a great save, Martin Keoghan was able to convert the rebound. That was in the 12th minute and, in the 24th, TJ Reid made a perfect run to snap up the ball after Conor Prunty’s fumble. Bang: 2-7 to 0-5.

By half-time Kilkenny’s uncharacteristic lapses of accuracy – six wides – looked more historical curiosity than active ingredient, but most great comebacks are based on the ability to limit damage when it’s all going wrong.

Waterford had Calum Lyons defiantly raiding from wing back – even when his primary duties weren’t going as well as hoped – and scoring two points.

Stephen Bennett, about to blossom into the Man of the Match and underline his credentials as potential Hurler of the Year, missed a couple of chances in the first half but hit five frees; in the 33rd minute, he launched a galvanic solo run at Kilkenny, at the end of which he pointed.

Half-time came as respite but the second half didn’t open promisingly. TJ Reid – who performed like Samson but in this case holding the pillars together – turned over Kieran Bennett from the throw-in and then Eoin Cody scored the first point after half-time. The margin was eight and the ambient mood was resignation.

Yet Waterford bounced up off the floor and got on with it. Their tightening grip was reflected in ball-winning – their ability “in the sky” was referenced by Cody afterwards – and hard, energetic running through the middle.

Jamie Barron, like most of the team, had been fitful and out of sorts, but he literally raced into the contest and suddenly pressure began to build on Kilkenny. Jack Fagan, their Meath exile, typified this with two superb catches and solo runs to provide assists for both the team’s goals.

Two minutes in, Stephen Bennett got the first, whipping hard on the ball after Huw Lawlor’s hook had disrupted his run on goal. Replacement Darragh Lyons had the second after Fagan had sent him in, and that 59th minute strike felt like the click of a car door closing on the semi-final, pushing Waterford’s lead to five, 2-22 to 2-17.

But it had been coming.

Dessie Hutchinson in the full forward line had suffered up until then from inadequate supply, but hadn’t been able to make much happen for himself given the iron grip of Conor Delaney in the first half.

Now he was threatening with every possession. Points and frees ensued. Austin Gleeson popped up everywhere shooting points from left and right; Bennett looked like he was seeking extra for artistic impression with a couple of scores from daunting distance and angles.

In the blizzard of scoring, it was Gleeson who settled the account in the 50th minute at 1-18 to 2-15, and on they went.

TJ Reid stood on the burning deck, stubbornly winning puck-outs and dispatching his flawless frees to keep them in it as Waterford came on in frenzied waves of attacks.

But the energy wasn’t there. Reid kept the match open on the scoreboard but every time Waterford had possession they threatened scores. Kilkenny did get to the final water break just three in arrears and hopes of getting a bounce from the newly introduced time for reflection rose when Reid scored immediately on resumption.

It was just a palliative. Still, you never know with Kilkenny. This time, however, there was no study in escapology. The benches had contrasting impacts. Brian Cody had rolled the dice by dropping his captain, Colin Fennelly, and Walter Walsh and starting Hogan.

Called in for what was now emergency work, Fennelly and Walsh couldn’t throw the switches. Nobody could. In contrast, Waterford harvested 1-3 from their replacements.

It’s hardly worth noting that the Leinster champions didn’t go easily. Reid scored, and aid came from the half backs, as Cillian Buckley and Paddy Deegan chipped in, but this was no ordinary challenge from across the border. It wouldn’t stop.

Gleeson even produced a collector’s item of a score that started with the rarest of preliminaries – beating Kilkenny to ruck ball and getting clear for a point.

What a season for Liam Cahill and coach Mikey Bevans. They took on a team with no championship win in nine matches, stretching back to the 2017 All-Ireland.

They now have another final date with the team that beat them in the Munster final just a fortnight ago, and they will not lack confidence.