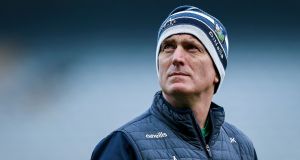 John Kiely knows enough about coming out on the wrong side of these games to not be one bit bashful about the hows and whys of landing on the right side of one. After losing last year’s All-Ireland semi-final by a point, Limerick got out of Croke Park here with three to spare.

Their performance was worth plenty more than that but Galway were level in the 75th minute and the next couple of scores could have fallen their way just as easily. That it would have been highway robbery is neither here nor there. It was a cliff-edge that Limerick came mighty close to losing their footing on. They’d never have forgiven themselves.

“It was a tough battle, a really tough battle, very physical,” said Kiely. “It was a battle but at least we got out on the right side of it. We might not have got off to a very fluent start. We still created a few chances alright, but just a few handling errors and bits and pieces, we were just a bit nervy maybe.

“Once we settled into it then midway through the first half, we got into a good rhythm and clawed back that lead Galway had and it was nip and tuck then for long periods of the game. Very satisfied with the performance, because when things are coming as easily as you might like, sometimes that can be a day that you back off it and just accept that maybe it’s not happening for you today and you are finding it difficult.

On that last point, Kiely was spot-on. Peter Casey whipped two fantastic scores upon his arrival and must be in with a shout of reclaiming his place for the final. Casey’s other big contribution was to take the catch that set fellow substitute David Reidy away for the sealing goal chance on 55 minutes. Eanna Murphy’s save kept Galway in it, one of three he made in the game. But it was a further example of Limerick’s wastefulness, which would have been more heavily punished on another day.

“At least we had a few chances, which is great,” Kiely said. “We had a few chances and on another day - like, Kyle [HAYES]was in there [on the rebound to an earlier Seamus Flanagan goal chance] and it was just a last-ditch effort that just prevented him from getting that final touch. Maybe the initial shot could have been lower and prevented the Galway keeper from getting a hurley to it.

“But listen, we were creating chances. They didn’t come off, at that stage it was 0-22 to 0-18 I think and a goal would have put breathing space in there. The pressure came back on again and as you saw from frees and sidelines, they had five sideline scores and I don’t know when we’ve last seen five points from one team from sidelines in a game. That’s an extraordinary return.”

For Galway manager Shane O’Neill, the desolation of a semi-final defeat was tempered a little by his pride in his players. Galway were outgunned for most of the afternoon but they were still able to keep stride with Limerick, for the most part. To do so without Cathal Mannion for the last 50 minutes and without Joe Canning for the closing 10 was an achievement in itself.

“It was an epic battle between two ridiculously good sides,” O’Neill said afterwards. “I just thought that it was extremely tough throughout for both sides, extremely physical. There wasn’t much space and it was a credit to the boys to actually exploit it and it makes me proud of what they achieved out there with the performance.

“I didn’t think there was much difference at all, to be honest with you, and I thought that was reflected on the scoreboard. There was so much happening out there so I suppose it’s only when you sit down and look at it that you can reflect on it, but I think as the game was going on it could have gone either way. We were down maybe five at one stage but came back again, which is testament to the boys. They just dug it out and kept going and going and as I said, we’re immensely proud.

“Limerick were stronger directly after the water break, they had a net positive in each of those quarters, I suppose, as opposed to the start and after half-time. When you’re playing Limerick you have to target every minute.”