From GPS trackers to No27 jerseys: The role of the sub in hurling 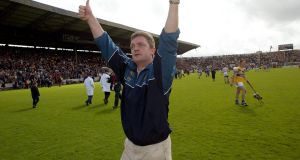 One former inter-county hurling manager termed it, ‘the lonesome look’. It’s when you are getting walloped early in a match and glance over your shoulder, trying to work out which of your bench full of replacements is going to make any difference.

Irish Times hurling analyst Nicky English makes a similar point going back to when he first took over as Tipperary manager and veteran county secretary, the late Tommy Barrett, offered some advice.

“I remember Tommy saying to me when I was starting out, you know the strength of what you have on the team when you look back into the dugout at what you have behind you. I never forgot it; it’s really true.”

Substitutes and their role in hurling have been revolutionised this century. It may have had its origins in football but the move in 2000 to allow five rather than three replacements and by extension a bigger panel had a huge impact on English, whose managerial career spanned both dispensations.

The tightness of the numbers in those early years meant that as well as having only three match-day interventions at a manager’s disposal, he also had to tell everyone from number 22 up, that they weren’t involved in the match-day panel.

John Meyler, who stepped down as Cork manager last year, remembers as a player being told in the middle of the pitch in Páirc Uí Chaoimh after a training session that he wouldn’t even be going to the 1983 All-Ireland semi-final against Galway, let alone involved in the match.

English in his first years didn’t name a replacement goalkeeper, as he viewed it a waste of a substitute slot and an outfield player was designated to stand in if anything happened Brendan Cummins. But by the time he led the county to the 2001 All-Ireland he had become the first manager to use five replacements in a final.

Getting the extended panel right and handling the dynamic of players, who start, sit on the bench or out of the way in the stand is a major challenge for managers.

Micheál Donoghue, who stepped down last summer, took Galway in 2017 to a first All-Ireland in 29 years and believes that creating a single identity for a large group of players with different prospects and expectations is the most important task any manager faces.

“Tactics are dictated by what you have. There’s no transfer market in hurling. I found that it was a matter of getting the rest of the panel pushing to the same extent as the players starting.

“Before the All-Ireland in 2017 I got all the lads who weren’t in the match-day 26 and gave them each a jersey numbered 27. That went down really well with all of the players as well as their families.”

The centrality of panels and broader options have become a major consideration in modern hurling. There are two significant aspects of this: styles of play and the recent adoption of round-robin fixtures for all teams in their provincial championships.

“Limerick and Wexford have a style of play that requires subs,” according to English. “When Limerick won the All-Ireland in 2018, their subs were extremely important - Dowling, for example, contributed a lot. In their style, you get a lot of travelling by midfielders and wing forwards in that shorter style of game.

“It was where Wexford came unstuck against Tipp in last year’s semi-final – they ran completely out of steam and their subs weren’t able to turn it around.

“To bring the ship home, they needed the bench and Limerick had it in 2018. Look at a player like Gearóid Hegarty – a key influence for them but he finishes hardly any matches (he was replaced in 10 of the county’s 13 championship matches in the past two seasons).”

John Meyler acknowledges the same influence in his two years with Cork.

“Aerobic capacity has gone up and up. Your numbers 10 and 12 are going up and down the field, like the Limerick wing forwards. We had Danny Kearney and Luke Meade working intensely and then getting substituted after the work rate has exhausted them and you bring in impact subs for the last 10 or 15.

“Getting fellas to buy into that is important. As a manager you’re saying to a player two weeks out, ‘you’re going to be coming on in the 55th minute and you have to be mentally, physically and tactically ready. I don’t want you sitting on the sideline watching the game go past you. You have to understand what your role is.’”

When the round-robin format came in Galway were All-Ireland champions but for Donoghue this was a new world.

“It was. In 2017 we had two, three, even four weeks between games and if you were disappointed not to be on the team or in the 26 you had ample opportunity to put your hand up and push for a place the next day. A year later and the whole thing changed and we were kind of flying blind into it.

“It was an environment more familiar in rugby and soccer so we engaged with Andy Friend (head coach) in Connacht rugby and researched how they managed the weekly schedule of games and the quick turnaround. But you’re comparing amateurs with professionals.

“We could be playing in Kilkenny or Dublin and a hurler might pick up a knock and he has to go to work the next day. We learned a lot in 2018 about how to plan those campaigns - not that it did us much good in 2019!”

How the bench is used frequently has a key impact on outcomes. It can go wrong, as English remembers from his first year when he dabbled with keeping an important player in reserve.

“I memorably held back Declan Ryan in 1999 in the Clare replay and got ridiculed afterwards when it blew up in my face. The idea was to let things settle first but we ended up being hammered and I was bringing on Declan after 20 minutes to try and save any kind of face for myself and our team. I never tried it again.”

In the high-tech environment of modern hurling, there are tracking devices to keep tabs on players’ fitness levels and alert the management when someone starts to flag.

“We hadn’t GPS until 2017,” says Donoghue. “The first year we didn’t have enough units because of the cost but it’s not all about ‘up and down, up and down’. In 2017 all the players had units and we had live feeds so Lukasz (Kirszenstein, head strength and conditioning coach) and the team could say, ‘he’s done 12k and he’s tiring’.

“An example was Davy Burke in the ‘17 All-Ireland, the boys came to me with maybe 10, 12 minutes to go to say that on the information they had, he was canned. I just called to him and said, ‘I know you’re wrecked but I’m not taking you off until you tell me you have to’.

“There has to be that trust that players will be honest with you and not be afraid that you’re going to accuse them of not being fit enough.”

The century has seen the role of substitutes transformed and Meyler references basketball in the scale of that transformation.

“It’s absolutely important. The NBA in America have an award every year for the best sub in a season.”