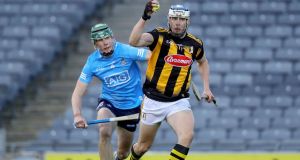 History was everywhere last week but Waterford will want to play down its presence this Saturday, as they have a poor track record in this fixture. This year’s history or precedent, however, is a bit more upbeat.

After two extended championships that yielded no wins out of 10, Waterford have been restored to prominence by Liam Cahill’s management.

They have added incrementally to their performances and have exceptional contributors all around the pitch from obvious figures like Jamie Barron and Tadhg de Búrca to those making big impacts for the first time like Conor Prunty and to a large extent Stephen Bennett and newcomer Dessie Hutchinson.

Their application in the Munster final was commendable in the way Limerick never got to disappear over the horizon. Given their established relationship, Kilkenny won’t be quivering at the prospect.

Brian Cody’s team has blended willing, younger players with a sprinkling of ageing stardust, as perfectly represented by the goals from Richie Hogan, who – maybe counter-intuitively is listed to start after making such an impression just off the bench a fortnight ago – and TJ Reid.

There has been surprise at the team selection and omission of Colin Fennelly and Walter Walsh against opponents who were found to be generous by Clare under early ball into the inside forward line.

Admittedly, both dropped players had been removed before the end of the Leinster final but aerial assault needs targets and Clare are still vibrating from the stress of Kilkenny’s long deliveries in a pre-championship challenge match.

It’s not expected that the team will actually line out this way but apart from restoring one or two of the big forwards, it’s not clear how it would be radically improved in the light of resources.

Kilkenny’s progress has been resilient. Not alone did they finish sharply in the Leinster final, they re-wrested the initiative after Galway looked to have regained control – something they also had to draw on after Dublin had sensationally retrieved a 16-point deficit in the provincial semi-final.

They have had enough rest and enough testing to get the job done against a team that’s out for the third successive week.