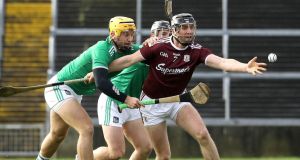 Limerick’s Tom Morrissey and Aidan Harte of Galway in action during this year’s league clash. The sides meet again in an eagerly-awaited All-Ireland semi-final at Croke Park on Sunday. Photograph: Lorraine O’Sullivan/Inpho

This would have been the weekend. Two All-Ireland hurling semi-finals wrapped around a couple of jamboree days in Croke Park. A gathering of the tribes, like a conclave bringing all the hurling bishops to Dublin. Priests, nuns and curates too. Faithful, all.

Up to the city for 48 hours, hit the Palace, Flannery’s, Ryan’s and Coppers, yak away into the night about this and that, disagree about everything except the need to keep the black card out of hurling. In amongst it, a couple of games. Four teams shaved down to two, the season distilled to its essence.

Covid has taken plenty. And plenty of it has been much more important than this, of course. The practice of playing both semi-finals on the one weekend is itself only a couple of years old but already it had become a fixture, an anchor date in the calendar. Apply all the usual caveats – lucky to have it at all, etc, etc – and the feeling of loss still lingers. When it comes back, Dublin is going to get some rattle.

We still have the games and, if recent history is any kind of guide, the games will sustain us. For one reason or another, All-Ireland semi-finals have come to mean the greatest show in town. Over the back half of the 2010s, they routinely over-delivered in terms of drama and tight finishes.

And if that’s all a bit too digital for your liking, the analogue breakdown is just as telling. Across 14 games over the past six seasons, including replays, only four have been decided by more than two points. And one of those was Limerick’s defeat of Cork in 2018 which needed extra-time. Imagine scoring 1-27 in 70 minutes being told you needed to go for 20 more. That’s what these teams have been serving up to us in recent years.

Laying out the sides on page before us, it’s reasonable to hope for more of the same here. The action might make fools of us – and it wouldn’t be the first time – but at this remove, it looks like the match-ups have fallen nicely.

For sure, Limerick could do their Jules Winnfield impression and unload great vengeance and furious anger on just about anybody. But if there’s a team left who are big enough and brassy enough to give them their fill of it, Galway surely fit the bill.

Up until the 56th minute of the Leinster final, Galway were having an exemplary campaign. That they spent the remaining quarter-hour getting a thorough Richie Hoganing is no disgrace, so long as they learn from it. The way Hogan’s movement discombobulated Daithí Burke will have been of acute interest to Aaron Gillane. But equally, Burke has ridden in enough rodeos by now to know that Limerick are coming for him. He will welcome it.

There is a fascinating subplot on the sideline too. Shane O’Neill showed against Wexford and Tipperary that Galway have plenty of tactical nous when it comes to designing a game plan. Here, he will be plotting against a group he knows intimately, himself and his coach John Fitzgerald having been born, bred and made in Na Piarsaigh. Whatever Limerick have in store for his side, none of it will be a surprise.

That’s tomorrow’s work. Tonight around teatime, Kilkenny and Waterford face off. If we could have all reasonably guessed at three of the final four back at the start of October, very few of us had Waterford still kicking at this stage. If hurling did the Manager of the Month thing, Liam Cahill would be a standing dish by now.

Cahill has fashioned his own team in his own way. It wasn’t enough just to start winning again, although that was clearly high on the to-do list after a three-year wait. But Waterford haven’t just ground these games out; their scoring power has ramped up out of all recognition. They have the second highest scoring average in the championship, with only Limerick ahead of them.

They’ll need every bit of it against Kilkenny, who are clearly a level above Cork and Clare. And even if they weren’t, Brian Cody hasn’t lost an All-Ireland semi-final since 2005. That’s 15 years, 11 semi-finals, five Taoisigh and two recessions ago. They got past Dublin despite cosying into their sleeping bags for the second half and beat Galway without Walter Walsh or Colin Fennelly throwing into the pot. The least we can imagine is that there is more to come from them.

Four teams, two games, damn little to separate them. Might even come down to penalties somewhere along the way. In a mixed up year, it would make as much sense as anything else.