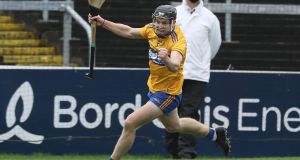 Tony Kelly: “Before it all kicked off I said that whoever beats Kilkenny will be in with a fair shout of winning the All-Ireland. They’ll beat Waterford but it will be tight.” . Photograph: Lorraine O’Sullivan/Inpho

He’s an obvious person to ask: Tony Kelly, a scoring machine in this year’s championship until Clare bowed out last weekend, believes that cynical play should be punished but he’s not convinced by football’s black card, which sees perpetrators of calculated fouls sent to the sin bin for 10 minutes.

Hurling however makes no special provision for that category of foul.

“I don’t know would the black card work because if you have a lad bearing down on goal in the last minute of an All-Ireland semi-final or final, you’re still going to take the black card.

“I do think a penalty is one way of stamping it out because you’re giving a lad an opportunity for a goal chance and if you were to introduce the black card, maybe have both, but I’d definitely think the penalty is one way to go.”

Kelly was speaking to media after being unveiled as the PwC GAA/GPA Hurler of the month for November. It won’t have been the hardest choice for the electorate of his fellow players. In three matches during the month, against Laois, Wexford and Waterford, he scored 1-36, having hit 0-17 in the Munster quarter-final against Limerick in October.

He was clearly inhibited in the All-Ireland quarter-final defeat against Waterford having rolled his ankle in the warm-up and aggravated the injury early in the match.

“Myself and Conor Cleary were doing a shooting drill, but it was actually fine after the warm-up. It didn’t really affect me at all; it was actually perfect. Out by the sideline then, just when the ball went over the line, whatever way I landed, I just completely went over on it.”

It’s an injury he’s had before and says it would have kept him out of this weekend’s All-Ireland semi-finals.

“I hurt the same ankle maybe three or four years ago, I did ligaments in it so then on Monday I went for a scan. The ligaments on the outside of my ankle are damaged, and I’m in a boot now for a week or two so I’ll get out of that as quick as I can and start building it up again. I’d be a goner this weekend anyway I’d say.”

Kelly’s performances have illuminated what’s been his best championship since winning the 2013 All-Ireland and becoming both Hurler and Young Hurler of the Year. He believes the rhythm of weekly matches suits him and that the season has been his “most productive”.

Otherwise it’s been a strange year with coronavirus-related restrictions and a hectic schedule of championship matches behind closed doors. But he disputes the view that the 2020 McCarthy Cup will come with more asterisks than ribbons.

“Some people might argue that it would be different with supporters there but there’s still 15 lads on the field, still panels of 26. Everyone got the same amount of time to prepare for it. So there will be no asterisk beside it.

“If anything, it’s probably slightly harder because teams are trying on game day, if you get a goal, you’re trying to create your own momentum. The lift of the crowd isn’t going to drag you through it or anything like that. Definitely no asterisk beside it – the team that wins the All-Ireland will be fully deserving of it.”

The public watching the matches on television largely won’t be aware of the demands on players in terms of the match protocols but Kelly says the transport restriction hasn’t bothered him or a few team-mates who also prefer driving.

He has an unusual view of the weekend’s semi-finals, predicting that it will be the Leinster final, which will be replayed on December 13th.

“I liked Kilkenny from the outset. We played them in a challenge match and they were extremely strong. Before it all kicked off I said that whoever beats Kilkenny will be in with a fair shout of winning the All-Ireland. They’ll beat Waterford but it will be tight – two or three points

“On the other side Limerick and Galway is a complete toss-up for me.

If I was to call it, I’d go for Galway – a repeat of the Leinster final, just to be different.”