Dublin overcome the elements and Carlow 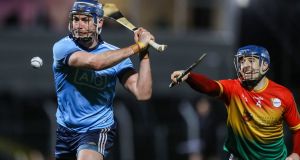 Carlow suffered their 10th defeat in a row on Saturday evening as Mattie Kenny’s Dublin side eased to an 11-point win in what were awful conditions for hurling at Dr Cullen Park.

Colm Bonnar’s charges lost all four games in the 2019 Leinster championship, while three Walsh Cup defeat followed and they remain pointless after three rounds of the league.

Bonnar remained upbeat despite the recent sequence of results and he would prefer Carlow to remain at the top tier, playing against the best teams.

“We’d rather be in this position playing the likes of Clare, Kilkenny and Dublin and learning,” he said.

“As much as we’re disappointed with the end results and being beaten by 11 points tonight and more by Kilkenny and Clare, I think it’s vital for those players in the dressing room that they’re able to keep their head and they have to bring it down to their individual battle with the Dublin players and I thought a lot of them came out on top.

“It was just their bit of slickness that added the extra couple of scores and pushed it beyond us but we need to carry more of a scoring threat which we’re not doing at the moment.”

Carlow played against the wind in the first half and while they trailed by 0-6 to 0-4 at the interval were very much in the game. But Dublin started the second half superbly and scored the first three points to put some daylight between the teams.

The visitors continued to press forward and, while they squandered numerous goal chances which would have given them a greater margin of victory, manager Mattie Kenny was pleased with his side’s performance.

“The conditions at the start were difficult, there was a strong, swirling breeze as well but we defended well in the first half,” Kenny said. “There were a few opportunities on our side to keep the scoreboard ticking but they kind of went looking for goals.

“We only scored six points. We would like to have a little bit more return from the first half but we are really happy with the character shown down here tonight and their work rate and they kept going for the 73 minutes which was very positive from the boys.

“On nights like tonight it is really about digging in, it’s not going to be pretty. Our guys did that even in the first half, like we only scored six points but we couldn’t fault the way they applied themselves. At half-time we complimented them on that, for their work rate, and just encouraged them to keep it going.”

Dublin face Wexford in Croke Park on Saturday night but headquarters has not been a happy place for them in recent times and they have not won there since beating Cork in March 2016.

On the other hand, Dublin are unbeaten in their last seven games between league and championship in Parnell Park but Kenny is looking forward a run out at Croke Park.

“We have Wexford and Clare coming up in the next two weeks now so that’ll be two quality matches for us. For the guys it’s all about matches this time of year and we’re getting a run out in Croke Park next Saturday night so you know I’m sure the surface will be top class there.

“That’s going to be something the lads are really looking forward to now is getting to Croke Park next Saturday night and, look it, Wexford are going really well at the moment so that should be a really, really good test for us,” Kenny said.

Horse racing is in the doghouse, but remains a magnificent triviality 06:00
My favourite sporting moment: Donegal and Kildare’s high summer street opera 06:00
TV View: Potters Corner wins the National without leaving Wales 06:00
Ken Early: Mick McCarthy II was no blockbuster, more of a flop 06:00
Angling Notes: No specific restrictions yet on recreational angling 00:00
Crossword Get access to over 6,000 interactive crosswords