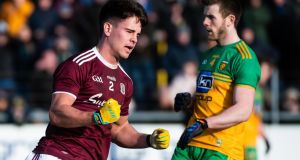 Storm Ciara passed but Galway stormed back from the brink to overturn a seven-point deficit for a valuable away win over Donegal at O’Donnell Park in Letterkenny on Sunday.

Pádraic Joyce’s men were 2-5 to 0-4 behind when Donegal’s Ciarán Thompson netted on 42 minutes.

However, Galway’s response was a pair of goals from their corner backs, Johnny Heaney and Seán Kelly, to take command.

Galway had their nerves tested late in the afternoon after Michael Daly was sent off and Donegal spurned two big chances as Thompson and Michael Murphy, who bagged their first goal, both missed frees in added time.

“It was a massive recovery, but the boys showed great character and great heart,” Joyce said.

“It has been questioned in Galway before – having heart and character and had we the bottle for these big matches?

“To come to Donegal and get two points is no easy feat so hats off, I’m so proud of the lads and I’m so proud to be their manager.

“They showed really good courage there in the second half and we scored two brilliant goals and got some great scores as well. The conditions were very difficult, on the pitch there was a swirling breeze out there and fair play to both teams for putting on a good show.”

The Galway manager said: “Joe McQuillan did his best to get a draw out of the game and gave them every chance. It was surprising that he missed that kick at the end, you wouldn’t expect it from him. But again, and we had it in Croke Park last night – the injury time. He said five minutes and there was eight played. All right, there was a fella down, but it wasn’t our fault he was down.

“Something needs to happen with it to be honest, because we seen it last night in Croke Park with Monaghan and again there today.

“We’ve had it the first day against Monaghan in the league game, we were told five minutes of injury time and there was nine and a half played.

“I know if someone goes down or whatever, that kind of stuff goes on but something needs to happen. It’s costing big games and lads are training all year. If we lost that game we were probably facing a relegation battle.”

Murphy netted a 22nd-minute penalty after Jamie Brennan was fouled by Connor Gleeson, the Galway goalkeeper receiving a black card.

Donegal were 1-3 to 0-4 in front at the break and Thompson had them seven ahead early in part two.

Galway, though, weren’t going to throw in the towel and they issued an immediate riposte as Heaney, put through by Shane Walsh, powered past Shaun Patton.

Walsh’s subsequent point left just a goal in it and teed up a tasty last 25 minutes.

Galway hit back to take a win and leave Donegal’s poor record in Letterkenny now standing at just two wins from their last 16 games at the venue.

“It’s not a case that Galway won the match; we handed it to them,” was Declan Bonner’s assessment.

“We were seven points up and we should have kicked on. We didn’t and that’s the disappointing thing.

“We’re very disappointed. We went seven points up and, for some reason or another, we switched off.

“We have to learn from it. That was a harsh lesson for a lot of those lads. Overall, we probably deserved to win. It was a difficult day for football, but we’re disappointed to get nothing out of it.”

The clock was well in the red when Donegal, twice, were given a chance to salvage a point. They were unable to take either and they left empty handed.

Galway, though, are finding their feet nicely under Joyce, who added: “The players are showing real desire and want to play for Galway and that’s a huge thing for us.