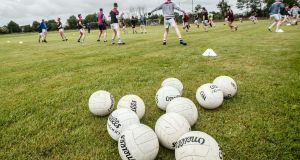 It might seem premature for the GAA to be worrying about training when the return to play appears so distant but director general Tom Ryan was sufficiently concerned to raise the matter at last week’s media conference to launch his annual report.

Among his responses was an admission that perhaps a greater period of training than the four weeks set aside last year might be needed before matches resume.

His concerns were illustrated by the cost of the GAA’s injury fund claims for 2020 which, despite the abbreviated nature of the year, were at €7.8 million only slightly lower than the annual average of €8 million to €8.5 million.

“One of the things maybe we didn’t quite get right last year was maybe we rushed back a little bit, in terms of the training effort that went in both club-wise and county-wise to get people back on the field, ” he said.

Dr Pat O’Neill, a member of the GAA’s Covid Advisory Group and a specialist in sports injuries, says that inadequate training is a big issue and that the numbers of players he was seeing last year was disproportionate.

“Lack of preparation is one of the big contributory factors to injury. Players had their own programmes but it’s still compromised in terms of team sports. In terms of my dealing with injuries it was about the same [as other years] but that was in a shorter timeframe.”

Asked what, in his view, was the ideal period for pre-season training he felt that it would be more than four weeks.

“About six weeks. In an actual contest you don’t have control of what you’re doing in terms of the input required of you at the pace of the game. A training session can be tailored and adapted either in time or quantum. A match has to be played as it is. You can say we’re not going to do any maximal sprinting in a training session and leave it when you get to three-quarter pace. In a match you can’t do that. You have to react.

“That’s the big problem with fellas coming back from injuries. They come back too soon and feel they’re okay but the stress-test comes in a match situation.”

John Murphy is a senior physiotherapist with a strong background in Gaelic games. He has been the lead on the GAA’s injury research unit since it was established and a long-standing member of the association’s medical, scientific and welfare committee.

He shares the same views on the matter as Pat O’Neill,

Murphy does however enter a caveat by pointing out that the 2020 season, viewed from another perspective, was actually more demanding than the championship condensed into the final months of the year.

“Whether the actual season was as short for the player as people think it was is open to question. All these guys were training away pre-Covid with their counties. They continued training waiting for the return to play before going back with their club and then rejoining their county.

“You could argue that the difficult part of the season was after the county after the club. Their real heavy load where they needed to be at 100 per cent came at the tail-end of the year. That could explain the heightened level of injuries. They were doing quite a bit during the year with clubs and on their own.

“Counties like Cavan and Tipperary actually had longer seasons than usual and even Dublin were in the position that their players had put in a full club campaign before intercounty started.

“So, overall players had their intense county season at the end of the year and after the club so I don’t think it’s totally surprising that there was such an incidence of injuries.”

For Pat O’Neill there is another consideration. Even if the season is accepted as shorter in strict championship terms, he says that the timing could well have been an issue in itself.

“There may have been an impact in the periodisation of the championship. The 2019 season was at the usual time so there was a change in the circadian cycle. Biological clocks were set to a different timetable and you’re asking the training load to take place at a training time quite different to what has been usual for years.”

Either way, it appears the GAA will have the additional challenge of finding extra weeks before the intercounty schedules can ideally take place.