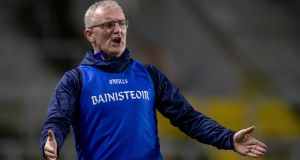 Brian Lohan: “We stuck to public health advice so we had no interaction with players on a group basis and they worked individually but that’s no substitute. We found the level of fitness had gone way back from where we were.” Photograph: Morgan Treacy/Inpho

Clare hurling manager Brian Lohan is in full agreement with Tom Ryan’s views on allowing additional pre-season training time for teams. Looking back on 2020, he believes that his team, who made it to the All-Ireland quarter-finals, weren’t able to reach optimal fitness levels.

He said that by the time intercounty training resumed in mid-September, he hadn’t had the players in session for six months and had further difficulties with Clare being one of the counties whose own championship ran later into autumn.

“Tuesday September 15th was our first day back but we hadn’t seen any of the players since March 12th. The biggest problem we faced last year was the number of players still involved in the local championship. There were significant numbers just not available to us.

“That was a disadvantage and then you’re trying to get in a couple of challenge matches to get yourself up to match pace for championship.”

Echoing the view of sports science experts, Lohan says that with the best will in the world, individual, unsupervised fitness work can’t replicate the conditions of interactive training.

“We stuck to public health advice so we had no interaction with players on a group basis and they worked individually but that’s no substitute. We found the level of fitness had gone way back from where we were.

“Even looking at gym work, squatting or your racks or whatever weight work you’re doing – people just don’t have that equipment at home and you can’t replicate it. So much of the training is power-based and weight-based that you really are missing out by not having access to those gyms.

“It’s a big gap in the development of players for a particular season.”

Clare hadn’t much luck with injuries in 2020, losing former All Star John Conlon to cruciate damage just before lockdown happened in March but once the intercounty championship began they didn’t suffer much in the way of casualty. Fitness, however, remained an issue.

“I don’t how other counties managed the lockdown but they seemed to do it better than we managed because there was a definite fall-off for us in the last 10 minutes or so of most matches.

“Injuries weren’t a big deal during the championship. The only issue was Aidan McCarthy broke his thumb.

“Another difficulty was the restriction on training to three sessions a week so there was no opportunity maybe to do extra work. I’d definitely favour six weeks’ preparation.”

On another matter and perhaps surprisingly for the most formidable full-back of his generation, Lohan is fully behind the motion at this weekend’s congress to introduce a sin bin for ‘cynical fouls’.

“Strategic fouling has to be addressed,” he says. “It’s a problem because it appears that teams fouling more are winning. There’s been that snobbish thing about hurling that it’s pure and can’t be manipulated whereas last year and again this year the game was manipulated and cynical fouling is becoming part of it.

“They’re also going to have to do something about people trying to manufacture frees. It’s a big problem.”

On the immediate issue of Tuesday’s county committee meeting, he has no comment to make. Controversy has arisen over the composition of various sub-committees, intended to address areas of vital concern for Clare, especially the group dealing with hurling.

A number of names have been associated with the hurling group, including Lohan and many other former managers of the county team but friction developed concerning the prospect of one of them Davy Fitzgerald, son of long-serving county secretary Pat, being included given that he is the current Wexford manager.

The Éire Óg club in Ennis has proposed an overarching committee, independent of the county board, to look at all future challenges and listed well-known names willing to serve on it.