Golden memories to the fore as TG4 sift the GAA archives 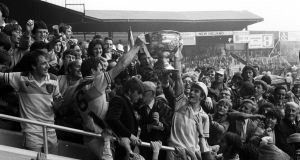 Sean Lowry and Mick Lowry lift the Sam Maguire for Offaly after they avenged the 1981 final defeat a year later to dash Kerry’s dream of five-in-a-row of All-Ireland triumphs. Photograph: Billy Stickland/Inpho

TG4’s new series, All-Ireland Gold moved on to its second instalment at the weekend.

Clearly indebted to BBC’s Rock and Roll Years and RTÉ’s immensely successful Reeling in the Years, it’s an admirable effort by the Irish language station, which has done so much for the programming of Gaelic games in its near quarter of a century of broadcasting.

All-Ireland Gold just about describes it as, over the past few months of lockdown, old footage has become almost tradeable in value and unlike RTÉ, TG4 has managed to hang on to archive rights.

The problem is that the programme length, 30 minutes with commercials, is quite dependent on what’s in the cellar and the opening fortnight illustrates the vagaries of this.

Last weekend saw the first in the series, which looks at the 1980s. Whereas there was a decent stock of material for 1980, the following year is a bit stretched.

They did have the advantage of two exciting years in terms of All-Ireland victories, as Kerry pieced together their second four-in-a-row and there were epochal hurling titles for Galway, a first in 57 years, and Offaly, first ever.

Overall though, it’s hard not to succumb to the stereotype view of the decade as a dismal era. The weather seems frequently miserable and pitches look awful. For good measure, the days of the hand-passed goal do the football highlights in 1980 no favours.

It was no wonder the GAA eventually intervened and banned it. Goalkeepers had little chance when an advancing forward could eyeball the ’keeper and all but toss the ball into the net.

In the well-remembered 1980 All-Ireland semi-final between Offaly and Kerry, just 0-8 out of 8-25 came from frees in a match described on these pages as “delightful”.

Yet half the goals were palmed into the net and the All-Ireland finals produced the odd statistic that of the seven goals scored between the two days just one – Bernie Forde’s opener for Galway’s hurlers in the latter – was actually kicked to the net.

There’s compensation in 1981 with three football goals between the finals, all of the highest quality from Gay McManus and Dermot Earley in the Galway-Roscommon league decider and Jack O’Shea – with the only goal of the All-Ireland finished emphatically after a five-pass move from a Kerry kick-out.

The 1980 football final, Kerry-Roscommon, was ghastly – “a foul-ridden shambles” – with 64 frees awarded in the 70 minutes. Pat Spillane was pilloried for play-acting but by that stage was simply taking matters into his own hands.

“It was,” he tells Mick Dunne afterwards, “the most physical game I have ever played.”

There is however greater interest than simply the All-Irelands although Galway’s emotional hurling win is memorable in itself. Audiences are used to the biggest days of the GAA year being used to encapsulate everything about the 12 months in question. It’s the Reeling in the Years template.

So it’s fascinating to see little-viewed action such as league and provincial finals. In that regard, 1980 fared better because there just didn’t appear to have as much surviving from 1981.

Both leagues and all of the provincial finals are included the first year whereas neither the Leinster nor Munster hurling finals make an appearance in 1981.

In keeping with the format, there’s a poppy soundtrack, availing of an unusual number of big-selling Irish records over the two years but relaying the events of the year in crawling text can be uncomfortable because the news is frequently so grim.

With an unsettling resonance we see Mayo and Roscommon players in the 1980s Connacht final wearing black armbands to mark the murder of two Castlerea-based gardaí, Henry Byrne and former Mayo player John Morley – screened just days before the killing of another garda based in the town, Colm Horkan, himself a footballer, also from Mayo.

The problem is that not all of the sombre events relate so seamlessly to the footage.

It was an awful couple of years. Between the Buttevant train disaster and the Central Hotel fire in Bundoran, 28 people are killed in 1980 and the following year sees the Stardust horror and the unremitting death march of the Hunger Strikes.

Reeling in the Years can show appropriate video but it can be a bit jarring to see even as private a loss as ’Dubliner Christy Brown is buried in Glasnevin Cemetery’ printing out over a goalmouth scramble and the song Every Little Thing She Does is Magic.

The desire to tell the story of the year is obvious and worthwhile but at times silence and a blank screen might be more appropriate than soundtracks of pop music and match commentary despite the obvious disruption to the overall narrative.

It’s an understandable dilemma though and, as mentioned, the two years to date were exceptionally depressing in the wider world.

But the games went on and, as captured in these programmes, created the normal context of memorable summers for so many: Kerry’s march on history, the unconfined joy of Galway and Offaly hurlers, the amount of goals scored for Limerick by Eamonn Cregan over the two seasons and, for all of us with the invaluable asset of hindsight, the evidence that Offaly were incrementally closing in on Kerry.

Back in the Kingdom in September 1981, Mick O’Dwyer tells the crowds: “People of Kerry, I would like to thank you for the wonderful reception. Let me say here tonight that you have seen nothing yet. It’s only the start.”

If only he knew.

* All-Ireland Gold is produced by Nemeton TV and screens on TG4 on Sundays at 5.40 pm and is repeated on Monday at 8.30 pm. Tonight (Monday 22nd), 1981 is repeated whereas 1980 is available on the TG4 Player. The remaining years in the decade will be shown in the coming weeks.