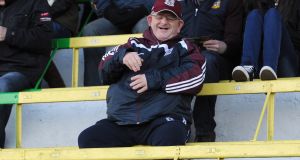 We sometimes forget that the games are just the icing on the cake. For three months people have wondered if and when the GAA “would be back”. Of course, it never really went away. It’s as much a part of Irish life as the crazy maze of third-class roads or the very fields or that shop window display or the pub with the family name cut in stone –whose true significance and role is becoming more apparent now that its doors have been shut for three months.

The west of Ireland this week lost two men whose lives were very much intertwined with the GAA. On Tuesday night, Pádraic Joyce sent out a message on the loss to Galway GAA of Brendan Coffey: “the real ‘Boss’ and one of our greatest ever supporters.”

Coffey was also an unofficial steward and basically had the freedom of Pearse Stadium. Former All-Ireland winning manager John O’Mahony paid a sincere and warm tribute to Coffey in a piece with Cian O’Connell on the GAA’s homepage. Coffey would have travelled on the bus and hung with the team during Galway’s All-Ireland years. His mood was upbeat and his opinions forthright – and they could sometimes hit uncomfortably close to home, which probably secretly delighted the manager.

But, like political dynasties, All-Ireland winning teams come and go. Brendan Coffey, it seemed, was always there, league and championship, winter and summer, an unchanging presence through the years. And one imagines that he was a reassuring sight for Joyce as he made the natural life change from audacious full-forward tyro to silvering manager.

In more recent years, Coffey was stationed in the press box in Pearse Stadium. He was there, actually, for the last game before the lockdown. Suffice to say he ran a tight if welcoming ship. Michael Cusack himself could have landed in to cover a game, but if he wasn’t equipped with the right pass from above in HQ and if Brendan didn’t happen to recognise him, then woe betide. It was pretty much impossible to pass within Coffey’s vicinity without being offered a cup of tea from the nearby flask – unless he was holding court in which case he’d breezily ask you to fetch one for him.

To the right of the press box window in Pearse Stadium, there’s a little nook sometimes commandeered by statisticians and analysts, the importance of whose role Coffey was never fully convinced about. Sometimes, when the crowd stood, the stats people stood also so they could see over them. That meant the view in the press box was also obscured. This was not going to roll with Brendan and many a stats team received stern admonishment.

When the Dublin footballers played Galway a few seasons ago, among those helping out with the stats was an injured Jack McCaffrey. And nothing he ever encountered on the football field surprised him as much as that firm rap on the window and, when he turned around with the others, the sight of an indignant Brendan Coffey gesturing urgently and shouting at them all to sit down.

Word of his death this week obviously brought about a wave of sadness mingling with warm memories of the man. He had been a massive part of the Galway GAA story to the end.

Up the road in Mayo this weekend, the mood is entirely different. The community of Castlerea in Roscommon is, of course, shattered by the death of Colm Horkan, who had served their town as a popular and respected garda for more than 20 years. He was, too, a son of Charlestown, where he still lived, in the family home, with his elderly father.

His courage and the senselessness of his death will be reflected upon over this weekend and, in Charlestown, for good. People don’t forget. It was striking, in the television interviews over the past few evenings, just how easily local people in Castlerea summoned the emotions generated by the murders of gardaí John Morley and Henry Byrne some 40 summers ago.

In Charlestown, Colm Horkan was a vibrant part of the local scene. John Casey paid tribute to his friend and neighbour this week. He painted a vivid picture of the man: a warm, reliable guy, who loved being a guard, could never quite get over the wonders of Charlestown or Mayo GAA, was looking forward to seeing Liverpool win their first league title since he was a teenager. Sligo’s Eamonn O’Hara posted a message conveying his shock and remembering meeting Horkan on nights out in Charlestown.

Casey and O’Hara are big names in the folklore of Connacht GAA. Casey is one of the good eggs of the GAA world. His Mayo career was cut short by injury but he was a luminous figure in the front line during Mayo’s All-Ireland agonies of 1996 and 1997; for a short time, he was the future. O’Hara had the opposite experience: he kept playing forever and finished as one of the greats. Both men, coincidentally, made their inter-county debuts on the same pitch on the same day.

But the essence of their tributes was not what the GAA meant to Colm Horkan. The point was what Colm Horkan meant to the GAA. For all of their accomplishments and the cheering they received, both Casey and O’Hara are in no doubt that they relied on Horkan – and people like him – as much as he did on them as county players.

Both of them “get” that he was just as big a part of it as they were. That after the heart-ripping days in Castlebar or in Croke Park and you were back at home, he was the one you had a pint with; that when you felt like shit he was there to pick you up and that when your time in the sun had passed he was there still, stoic and reliable and enjoyable as ever.

Mayo’s Tom Parsons, another Charlestown man, posted a brief message communicating the heartbreak felt by all. Former Charlestown player and manager Stephen Healy, whose uncle John Healy wrote No One Shouted Stop, the celebrated profile of Charlestown’s declining light in the emigration years, spoke too about his friend. And they were just representing the hundreds of Charlestowners who will have their own thoughts about Colm Horkan.

There must be a deluge of stories and thoughts and moments, through the shared GAA days alone, that are drifting through the minds of so many this weekend.

And it won’t make anything easier or more explicable. But the day will come when Galway plays Mayo again. When they will wonder if Joyce might just provoke another one of those dashing maroon All-Ireland raids. The day will come when some Mayo team or other is tantalisingly close to the big dream. The day will come when the sky is achingly clear and Pearse Stadium or MacHale Park is full to the rafters and the energy is racing through the place and the talk will be of ’51 and the perpetual wait and the enduring belief of the fans – “John says keep the faith”, as the famous banner read.

And sooner or later there will be some acknowledgement that it is kind of mysterious, this essential, unbreakable devotion to a county football team, fastening generations and seemingly impervious to societal changes. That it is hard to put a finger on what it all really means or why it endures.

The answer is implicit and probably all about us this weekend. It’s about someone who became an intrinsic natural part of whatever “Galway GAA” means and who could feel sufficiently secure in his domain to rap on glass and tell the former Footballer of the Year that he is blocking the view – and have the footballer signal an apologetic acknowledgement.

And it’s about a decent man, admired more than he probably ever guessed, closing the front door on an overcast June afternoon to head to the station to work, moving through a town he knows off by heart.

1 Rory McIlroy puts integrity ahead of glory in US PGA second round
2 When Mike Tyson bit Evander Holyfield: 20 years on
3 Fifty years on from Black Power salute: Has anything changed?
4 Serena Williams ready for a socially distanced US Open
5 Buttler and Woakes drag England from the brink to set up thrilling Pakistan win
Real news has value SUBSCRIBE