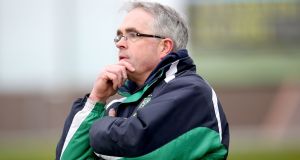 Luke Dempsey refused to give up hope that his Rochfortbridge team would get to play in the Leinster senior ‘A’ final. File photograph: Inpho

St Joseph’s Secondary School in Rochfortbridge and Naas CBS will contest the Leinster senior ‘A’ final on July 24th in Tullamore, 132 days after it was originally scheduled to be played.

Rochfortbridge are contesting their first ever final at the grade, while their Kildare opponents are going for three-in-a-row.

The final was to be played on March 14th, a day before the closure of all schools in the country due to the outbreak of Covid-19. Although it was not initially rescheduled and schools were not reopened, the two teams remained optimistic over recent months that a new date would be found before their players went their separate ways for university.

In early May the government opted to cancel Leaving Cert exams in favour of students being awarded predictive grades or calculated grades based on their classwork, but lockdown restrictions have eased considerably in recent weeks. Taoiseach Leo Varadkar announced on Friday evening that all sporting events could resume from Monday, June 29th, allowing the GAA to accelerate its scheduled resumption plan.

To the schools’ delight, their optimism for the competition’s completion has been shared by the Leinster Council. GAA games administrator Brendan Connolly told The Irish Times in May that “every effort” would be made to get the post-primary competitions completed. There are only four matches still to be played across the four provinces – the ‘A’ and ‘B’ football finals in Leinster and Ulster – and the possibility to complete the All-Ireland series was not being ruled out either.

Rochfortbridge manager Luke Dempsey confirmed the rescheduled match details to The Irish Times on Saturday. In an interview in May he explained his players were “mad to play this final. They’re enjoying putting up the different things that they’re doing to stay ready on WhatsApp and it keeps them busy,” said the former Westmeath, Longford and Carlow manager. “They are witty and good-humoured lads and they are living in great hope that this will be played. And we give them that hope by staying positive that things will improve as weeks lead into months.

“There’s only 400 boys in our school and Naas have something like 1,200 boys, so we’re underdogs. They’re such a big and strong team, they were beaten narrowly in the All-Ireland final last year, and they’re going for three-in-a row. But we don’t mind that.” Read that interview in full here.