Clubs preparing diligently for a safe return to fields of dreams 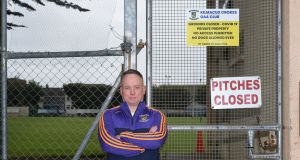 Páraic McDonald, Kilmacud Crokes coaching director, at the club’s grounds in Glenalbyn, Stillorgan. “There’s a huge amount of effort going in all over the country because people feel the value of it and the importance of it.” Photograph: Alan Betson

Páraic McDonald of Kilmacud Crokes had a club executive meeting on Tuesday night and a football meeting on Wednesday night and in between there was an afternoon meeting with Dublin County Board coaches and that’s just one 24-hour period.

In Kilkenny, Graigue-Ballycallan club chairman Dave O’Neill is motoring along as well, rattling through calls and meetings and gathering up a sense of what the next three weeks are going to be like before it can all kick off again.

“We’ll have to prepare our facilities,” O’Neill says. “We have a groundsman, Maurice ‘Gussy’ Ronan, who is the only person who has been in the place in the last 12 weeks. Anyone else who wanted to set foot in the club would have been painted. Gussy has every inch of it painted, cleaned, tidied and ready.

“We’ll screen off the clubrooms and dressing rooms until August. Initially, parents will drop their kids and go. Parents will have to have the contact tracing paperwork filled out. We’re going to invite them to do temperature tests but we will also do them. There’ll be no second guessing on anybody. There’s a questionnaire that will be filled out for each training session for each player.

“We will have to sanitise all our equipment – hurls, cones, balls, ladders, all of it. Before and after. We’ll have sanitising dispensers there on site when players arrive. We will make sure that once players arrive, they go straight onto the pitch.

And so on, and on, and on. The GAA has published its roadmap for returning to play and now it’s up to each individual unit to colour in their own small patch of it. For a small club in Kilkenny, the issue is always numbers rather than space – Graigue-Ballycallan has 14½ acres to play with so they’ll have no problem spacing everyone out. They’ll just need to dragoon more volunteers than before to cover everyone.

For a massive club in Dublin though, the issue is reversed. There’s no shortage of bodies. There’s also no easy way to find room for them all. The guidelines say you must split training sessions into pods of 10 players with two coaches to each pod. Fine in theory but what happens when you have around 100 kids in each session and a limited amount of space to house them all?

“The challenge for us is that most of the age groups from under-14 downwards, you’re talking about anything between 80 to 120 kids in each group,” says McDonald, a full-time coach with Crokes.

“That’s just the boys – you have camogie and ladies football on top of that to fit in as well. So actually just giving them the physical space to operate safely and within the guidelines is very challenging.

“The challenges are always the same in terms of finding enough space and facilities for everyone who wants to play. It’s always a loaves and fishes exercise. It’s going to be more acute, especially in Phase 3 and Phase 4. It will ease out a bit in Phase 5 and as competitions are played and teams run out and finish up. The pressure on facilities will ease a bit then.

“But until then, the amount of bureaucracy around it, if you want to call it that, is going to be pretty extensive. The work of the Covid supervisor, getting all the health questionnaires filled out, taking everyone’s temperature, all that stuff. And doing that for each session. How many supervisors are we going to need per age group? Does each of those pods in the initial phase need their own supervisor? That’s the kind of stuff we need to work out.”

Talk to anyone in any club up and down the country this week and these are the conversations they’re having. The plans around summer camps are still being fed through the mincing machine but at the moment, everyone is optimistic that they will happen – at least in August and possible even some in July. It’s an evolving situation, regardless of your club’s size or location.

“There’s a huge amount of effort going in all over the country because people feel the value of it and the importance of it,” McDonald says. “You can see it all over this week – in Croke Park, in Parnell Park, in the club itself. There’s meetings going on all the time to get us into a place where we can get it started, trying to find a solution to get the players back doing what they enjoy and what they love doing.

“Dealing with kids and dealing with underage, it’s just about getting to play the games. League points, going up or down, whatever else – it’s just not on the list of priorities. Getting them out, getting them active, getting them playing matches. Whether they lose the game or not isn’t that important in the general scheme of things. And never more than now.”

In Kilkenny, Dave O’Neill has the same attitude. Getting out onto the pitch is the win, everything that comes after it is icing. It was in that spirit that he made representations on a conference call of club chairmen in Kilkenny on Wednesday night, asking that for this year only, all relegations be scrapped. Let 2020 stand on its own, so as not to browbeat people into doing taking risks they shouldn’t.

“My biggest worry is not on what we do on our field,” O’Neill says. “It’s not what we do with our equipment or in our dressing rooms. My biggest worry is the pressure that will be put on players. We have to accept as clubs now that for health reasons, there will be some players who will not be able to return to play. Players will have parents at home who have underlying conditions and I just hope that we can all be responsible enough as an association not to pressure those players into taking a risk.

“You will have doctors, nurses, people on the frontline. My concern at the moment is not how we behave as clubs. It’s the pressure that will be put on players by the way we structure our competitions. A lot of county championships have relegation and promotion and I would worry that fear of relegation or fear of losing your status for next year will force clubs to put pressure on players to play in crucial games. We will force responsible people to do the wrong thing.

“I think we have to make this year a one-off. Success is getting to play at all. Success is not winning your competition or avoiding relegation, not for this year. there will be players who have to go into isolation for a fortnight at some stage and that fortnight will cover the weekend of a big game.

“I think we need to make it so that those players aren’t going to be sitting down and thinking that my choice is either I break isolation or the club gets relegated. We can’t let that scenario arise. Not this year. Not when the whole country has made the sacrifices it has made.”

Nuts and bolts. Devils in details. The minutiae of a world a lot of them thought they wouldn’t get back to at all in 2020. Working through it all is a headache, the task of finding bodies and helpers and solutions a burden.

After everything, it’s one they’ll happily bear.

1 Cian Healy: ‘Realistically I got away with murder when I was younger’
2 Johnny Sexton: ‘We just know we have to be a lot better in all areas on Saturday’
3 Seán O’Brien: Anger over my parents’ break-up never left me
4 Gerry Thornley: Antoine Dupont and France look perfectly primed for Ireland visit
5 Ireland's centre will hold thanks to Henshaw and Aki’s midfield muscle memory
Real news has value SUBSCRIBE

Sub-four miler Michael Woods kicks to another Vuelta stage win 18:03
Ukraine’s win in Greece leaves Ireland needing to beat Germany 17:44
Ladbrokes and Coral to leave racecourse betting rings in Ireland and Britain 17:12
Barbarians’ coronavirus breaches will not be investigated by police 16:57
Cian Healy: ‘Realistically I got away with murder when I was younger’ 16:44