TV View: Stunning Limerick display consigns Waterford to the shelf along with the Elf 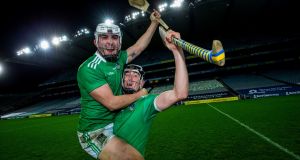 Joanne Cantwell reminded us of how Limerick captain Declan Hannon summed up the oddness of it all earlier in the week. “It’s gas,” he said, “putting up a Christmas tree with one hand, and with the other preparing for an All-Ireland final.” He probably even had his plum puddings made, when usually they wouldn’t even enter your thoughts until long after Liam MacCarthy was on board a bus heading for a victory parade.

“Empty stands and fairy lights on set, just your usual setting for an All-Ireland final,” said Joanne, Henry Shefflin noting that the Elf on the Shelf was back again too, and he wasn’t referring to Anthony Daly or Donal Óg Cusack, who were alongside him.

All three men expressed wonder at the fact that we had an All-Ireland final at all when, not so long ago, the prospect seemed a little less than likely. “It’s almost been a health service to the country in itself,” said Donal Óg of the Championship that survived, giving us all something to be savouring while marooned in our bubbles.

Poor Anthony, though, was denied a reunion with his 1995 Clare comrades, them socially distanced back home instead of on jubilee-winners-parade duty in Croke Park, so he just carried Liam out on to the pitch all by himself. “That’s one of the saddest things I’ve ever seen, you walking out on your own,” said Joanne. “Don’t start me off,” said Anthony. “But me bringing it out was like I was bringing the lads out, and we were waving to a full stadium.” Not enough Kleenex in the house.

When the new date for the final was announced a while back, we’d have worried that the scene would be a winter wonderland, with the players needing shovels to dig the sliotar out of the snow. But as Dublin women’s football manager Mick Bohan put it the other day, “we’re just very lucky – God has at least given us good pitches to play on, after giving us a virus”.

So, a more welcome divine intervention, then, which, as it proved, was what Gearóid Hegarty brought to the final. Although, when the panel started listing out the contenders for the man of the match award, they pretty much named the entire Limerick team.

An unrelenting masterclass, from the whole bunch of them. Indeed, if Marty Morrissey had a euro for every time he called them awesome, the Sultan of Brunei would have been asking him for a loan. Jürgen Klopp called his lads “mentality monsters”, John Kiely could call his the same.

The only wonder at half-time was that Limerick were only three points ahead, but that was in part due to Waterford goalkeeper Stephen O’Keeffe and that double save that nearly had Marty falling out of his commentary box.

“I thought we were about to see the greatest goal ever scored in Croke Park, instead we saw the greatest ever saves,” as Michael Duignan put it.

Come half-time, Donal Óg, him being a member of the goalkeepers’ union, was purring, but having all tipped Limerick, the panel was beginning to wonder if we’d have the most 2020-ish of second halves, with Waterford prevailing.

So much for that. The masterclass stepped up a gear, Limerick close enough to being out of sight not long after the half-time kettle had boiled. “How could you mark that fella,” said Duignan of Hegarty, Marty – and Waterford – offering no answer. As for Séamus Flanagan – as Donal Óg described him, “he’s like a heavyweight boxer who could do pirouettes”.

An 11-point victory in the end. “Should we be talking about splitting Limerick,” Evanne Ní Chuilinn asked manager John Kiely, but he wasn’t up for the proposal, he’d like it to stay intact.

Henry reckoned it’s not the last we’ll see of this team in Croke Park on final’s day. “Twelve of those players are between the age of 22 and 26 – so they’ll be back again,” he said. Be afraid, rival hurling counties. They want more. And they’ll be impossible to ignore.

For Limerick, the happiest of Christmases.