Andy Moran commits to another year with Mayo 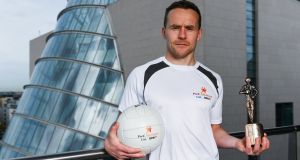 Mayo’s Andy Moran and Waterford’s Jamie Barron were confirmed as the PwC GAA/GPA Players of the Month for August in football and hurling. Pictured is Andy Moran of Mayo after being presented with his award. Photo: Sam Barnes/Sportsfile

Defeated again and yet utterly undeterred in his quest for glory, Andy Moran remains fully committed to Mayo football next season – and possibly even beyond that too.

Speaking at the announcement of the GAA/GPA Player of the Month awards, Moran – the August monthly winner – also indicated that Mayo’s hunger for All-Ireland success is possibly even greater despite the final defeat to Dublin for the second successive year.

“We’re luckily enough due another child in January, and fingers crossed everything goes well there I’ll be back in 2018, no doubt yeah,” says Moran.

“This thing about quitting, I’ll go when the likes of Stephen Rochford and them boys run me. I suppose that’s kind of the way we were brought up, from the town we’re from. So I don’t think I’ve ever had in my head that I’d ever quit. If Jenny my wife backs me, and my life kind of goes with it, there’s no reason why I wouldn’t go back, to be honest.

“We’re in a very privileged position, from Mayo as you know, a bit nuts, as you say. Our first league game next year will probably have 15,000 people at it, at McHale Park, so that definitely makes it a bit easier, in where we want to go to, and get to.

“Is it as easy as saying just go again? It’s not, you have go away and reflect and see where you’re going to go yourself, in terms of family life, work life, stuff like that. But in terms of football this is what we do, what we love, so we just go again.”

Moran turns 34 in November, and 2018 would mark his 14th season at senior level, having already made over 150 appearances for Mayo between league and championship.

His own form this year – which saw him nominated as footballer of the year – had little to do this his decision. He was likely to continue anyway.

Despite delivering arguably their best yet performance against Dublin, the one-point defeat still every bit hurt as much. Is there a difference to last year?

“There probably isn’t, being honest. It’s the same net result as what we got last year, in terms of the result from an All-Ireland final. But life goes on, as you say.

“I’d to go back to work on the Wednesday, have a little girl at home, and life goes on. It’s a game, we lost it, and we just have to go again and see what we learn from it.”

His work in Castlebar, and the gym business he runs just across the road from McHale Park, has also helped him squeeze more out of his career.

“Yeah, that’s true. My problem is that I got injured at the wrong time, around 2011, 2012, broke my leg, did my cruciate, then had back issues, just because the body was out of line. If I’d kept driving the car, kept being a rep, there was no way I’d have been able to keep going, so yeah the gym has definitely helped, got me out of the car, got me moving a bit more freely.

The other GAA/GPA Player of the Month award winners, the first under the new sponsorship of PwC, saw Galway’s Conor Cooney and Mayo’s Lee Keegan as July winners, while Waterford’s Jamie Barron was the other August winner.

Conor Cooney was instrumental in Galway’s Leinster SHC final win against Wexford at the start of July; the St Thomas’s clubman scored eight points in a man-of-the-match display.

July was a busy month for Keegan as Mayo had hard fought wins against Derry, Clare and Cork in the All-Ireland football qualifiers. He was then named man-of-the-match in their quarter final drawn encounter with Roscommon, scoring 1-03 on the day.

Barron scored 2-01 in an all-action display as Waterford defeated Cork in the All-Ireland hurling semi-final; Moran was on fire in Mayo’s All-Ireland semi-final drawn encounter with Kerry notching up 1-05, scoring 1-01 in the replay win a week later.