After a number of appointment, only Sligo and Wexford still have vacancies at the top 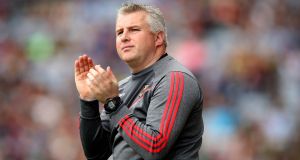 Stephen Rochford: is expected to confirm he will remain with Mayo for a third year. Photograph: Tommy Dickson/Inpho

Just two counties have yet to appoint football managers for 2018.

A number of appointments made this week have filled most of the remaining vacancies with Sligo and Wexford the only counties still in the process of identifying who will take over for next season.

Stephen Rochford, manager of beaten All-Ireland finalists Mayo, is currently considering his position but the county board have been clear that the job is his should he wish to continue and optimism has been expressed that he will remain for a third year.

Either way there will be a significant turnover of nearly half the football managers with new bosses already in place in Laois, Louth, Offaly, Westmeath, Wicklow, Cork, Antrim, Donegal, Derry and Fermanagh.

The longest serving football manager is Tyrone’s Mickey Harte who, despite a disappointing All-Ireland semi-final defeat by Dublin, has had his tenure extended by a further three seasons at the end of which he will have been with the county for 18 years.

Outgoing Cork hurling manager Kieran Kingston said earlier this week that his decision to step down after a successful season that included the Munster title was related to the time-consuming nature of the role.

“As many intercounty managers have pointed out recently, only those involved at this level are aware of the sheer level of time commitment involved. It’s a professional commitment in all but name, and it amounts to a second full-time job for any manager who has ambitions not just to participate, but to succeed at the highest level.”

Despite these demands there is no shortage of candidates to take up inter-county positions and this year’s hiring season has been notable for the number of appointments made on a merry-go-round basis.

Four managers have changed counties in a chain effect: Declan Bonnar’s return to Donegal has seen his predecessor Rory Gallagher go to his native county Fermanagh and the knock-on impact sends Peter McGrath from there to Louth whose manager this year, Colin Kelly, was appointed in Westmeath.

There is relatively little churn at the top level of the game with Rochford the only manager from this summer’s eight quarter-finalists yet to commit to a further year. Before the championship began in May, Jim Gavin of eventual All-Ireland champions Dublin agreed to remain as manager until the end of 2019.

Of the other six, Roscommon were the last to confirm that their manager Kevin McStay would continue – with an announcement this week that he would remain with the Connacht champions for a further two years with the option of a third.