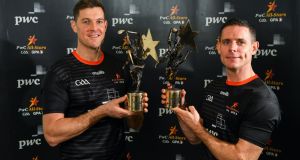 Hurler of the Year Séamus Callanan, left, of Tipperary and PwC GAA GPA Footballer of the Year Stephen Cluxton of Dublin with their awards at the PwC All-Stars 2019 at the Convention Centre in Dublin. Photograph: Seb Daly/Sportsfile

Cluxton, who turns 38 next month, is the oldest player to receive an All Star and the first goalkeeper to win the overall award.

Asked by RTÉ’s Joanne Cantwell about his future, Cluxton said: “Obviously in your heart, you love playing the game. You want to come back; you’ll do anything to play – the mind, the same thing – but it’s probably the body. I probably need to sit down with the physios and doctors and see if I can get through another year.”

Asked if he was saying there was a chance he’d be back, he replied: “A small one, yeah.”

This championship was an exceptional one for Cluxton, who claimed a sixth All Star but a first since 2013. In nine championship matches, Dublin conceded three goals and his displays in the All-Ireland final and replay included saving a penalty and at least two other goal-bound shots.

His career now stretches over 18 years, having made his debut against Longford in May 2001.

The honour, voted on by intercounty players, is overdue recognition for the most influential footballer of his generation – a player who redefined the role of goalkeeper.

This year he captained his county to the historic five-in-a-row, having done so in each of the five successive All-Irelands, as well as in 2013. His career total stands at seven Celtic Crosses.

His counterpart as Hurler of the Year is coincidentally also captain of this year’s All-Ireland winners, Tipperary’s full forward Séamus Callanan, another elite performer, who had solid claims to the honour before now. This championship he scored 8-17 from play in Tipp’s eight-match campaign, including a goal a match.

Dublin claimed seven of this year’s football All Stars in total – the same total as last year and the highest representation the county has received since the record nine awarded in 1977.

Two of Cluxton’s team-mates, Jack McCaffrey and centrefielder and last year’s Footballer of the Year Brian Fenton received their fourth in the last five championships. Wing back McCaffrey also earned back-to-back Man of the Match awards in All-Ireland finals, adding to last year’s in September’s drawn final in which his 1-3 played a significant role in Dublin’s hanging on despite being reduced to 14 men for 40 minutes.

The champions’ share also includes Cuala pair Mick Fitzsimons and Con O’Callaghan, who were also both honoured two years ago, while Brian Howard and Paul Mannion, two of five players to have kept their places from last year’s team – along with McCaffrey, Fenton and Kerry’s David Clifford, who continued to deliver on his underage promise with a sequence of fine displays, culminating in 0-8 over the two finals, including 0-6 from play.

Kerry’s run to the All-Ireland final and their competitiveness when there are recognised in first-time awards for Tom O’Sullivan, their go-to man marker for much of the season, and dead-ball maestro Seán O’Shea as well as a second career honour for David Moran at centrefield.

Tyrone pair Ronan McNamee, one of the most consistent defenders in the game, and the championship’s top scorer (with 3-49) Cathal McShane – on either square – are recognised as are Mayo’s Patrick Durcan, who performed a magnificent marking job on Jack McCaffrey in the All-Ireland semi-final against Dublin. Donegal’s spiritual leader, Michael Murphy, picked up a third award to go with this year’s Ulster medal but in a championship that was ultimately disappointing and which ended in defeat in the clutch match in Castlebar against Mayo.

Among those unlucky to lose out are Mayo half back Colm Boyle, who had an exceptional campaign, as the county battled back to the All-Ireland series and Stephen O’Brien who was Kerry’s leading candidate for Footballer of the Year up until the All-Ireland final and replay in which he didn’t play badly but losing out is a reflection of the high quality of the forward candidates this year.

The Young Players of the Year were also revealed at the Convention Centre. Seán O’Shea from Kerry won the football award, from his team-mate and fellow All Star David Clifford and Armagh’s Rian O’Neill. O’Shea had an excellent year, from his prominence in UCC’s Sigerson Cup win in the early months, through a league campaign that went all the way to the final and on to championship.
His place kicking is almost an art form, technically excellent and accurate. He ended the summer with 1-52, making him the second-highest scorer in the championship with 0-40 coming from the placed ball.

In hurling there won’t have been huge surprise at the news that Kilkenny’s Adrian Mullen had won the award, ahead of Kyle Hayes (Limerick) and Rory O’Connor (Wexford). He was just 19 when his club Ballyhale Shamrocks won the All-Ireland club title and he was named club hurler of the year. His intercounty season was distinguished by exceptional displays in the Kilkenny attack for a total of 1-13.