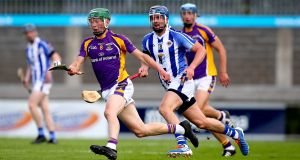 With Gaelic games back in action last weekend, the four provincial CEOs were happy to report that the return to play had gone smoothly. Attendances were successfully limited and match-day protocols followed.

Even though there have been s Covid-19 scares in recent weeks around the country, none of the alerts to date relate to GAA activities and, according to Leinsterchief executive Michael Reynolds, there may even be a silver lining to these situations.

“The biggest problem has been social events and the fact that a number of GAA clubs had to shut down for a few days has focused everybody’s mind and warned to guard against complacency. People are realising that unless we do our part, things mightn’t be alright.”

Association president John Horan bluntly declared last Friday that “sport and partying are not going to work at the moment”.

“We probably need to be a wee bit more vigilant and keep an eye on things. The postponing of Phase 4 was a reality check in that regard.”

On the field the games were up and running without incident. The main concern from around the country was the restriction on crowds, which stood at 200 – including teams, officials and media – after the Government decision not to proceed to Phase 4 of the exit from lockdown, which was due this week and would have raised the restricted figure to 500.

“Every county had games,” said Connacht’s John Prenty. “There were no issues reported. This week will tell us a good bit and if the Covid figures stay reasonable, we may be able to get the crowds up to 500.

“The Government’s being careful, understandably, but if we get to the August bank holiday and can show that the games have been well managed so far, you’d hope it can be looked at again.”

Reynolds said the television pictures over the weekend from Dublin and Wexford had shown there was room for manoeuvre.

“There was a great buy-in from the public and from everyone else. You could have had 500 in Wexford and people watching still would have said, ‘that place is empty’. We had two schools finals on Friday and they went off like clockwork, rules were observed and people didn’t turn up without tickets.”

For McAvoy the regulations were more complicated with no attendances allowed in Northern Ireland.

“It went well overall but we did have the situation where you had 120 or so at a match in Cavan, Monaghan and Donegal and none at all in the Six but all the regulations were adhered to even if there were incidents –- I’m sure you saw them on social media – of people on mechanical diggers and on top of vans trying to get a look in.”

He expressed optimism that the rules would change north of the Border before too long. “Hopefully. We’re in discussions with the Executive about securing some sort of relaxation of the limits.”

In Munster Kieran Leddy said that matches in the counties had gone well and that activities in the province would be stepping up from now.

“There was action at some level in all counties. Championship won’t get fully into swing until the next couple of weekends when all counties are expected to be in senior action.

“Clubs are adhering to all guidelines, which is good to see, and I’ve even seen minor matches go all-ticket, which must be a first. It’s been a positive start and I’ve no doubt it will continue in that vein.”