Roscommon bring Monaghan crashing back down to earth 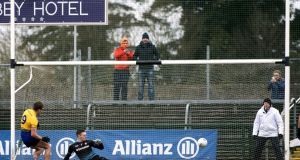 Anthony Cunningham admitted that his side were learning all the time about life in the fast lane as his side caused a huge shock against a Monaghan side that humbled All-Ireland champions Dublin seven days ago.

They say a week is a long time in politics, and for the Monaghan players the contrast in emotions couldn’t have been greater as they could only watch on as their less fancied opponents staged a real “smash and grab” raid.

Roscommon lost Conor Cox and Tadhg O’Rourke to black cards in the space of a minute, but Enda Smith’s coolly-taken penalty, as the game ticked into injury time, nudged his side into a two-point lead. Frees from Jack McCarron and Conor McManus brought the sides level but Malachy O’Rourke’s side lost Stephen O’Hanlon, one of the goalscoring heroes against the Dubs, to a straight red card moments after his introduction.

The home side duly seized the moment and when Cox - making his competitive debut - landed an audacious free, Ronan Daly made sure of the precious league points when his surging run procured the insurance score.

“We’re learning all the time. There’s great work going on in the background with Iain Daly, Mark Dowd and Noel Flynn, our strength and conditioning coach, and the backroom team. But the guys are responding. We wouldn’t be doing all this work if we weren’t getting a response,” said Cunningham.

Roscommon were 0-6 to 0-4 ahead at the break, but their lead should have been greater.

Seven first-half wides threatened their superiority, and it took a great save from Rory Beggan to deny Evan McGrath a goal in the 23rd minute.

Smith restored parity before debutant Cox, having transferred back to his home club Listowel Emmets in Kerry from Éire Óg during the week, guided a 45-metre free over the crossbar with the outside of his boot.

Pressure on Beggan’s kickout procured a point for Niall Kilroy before McCarron finished off a neat Monaghan move with a score.

But Roscommon were generally frustrating the Monaghan attack, and centre back Niall Daly landed a monstrous effort from distance to open up a 0-4 to 0-2 lead.

Beggan eroded the deficit from a free before thwarting McGrath shortly afterwards. O’Malley, from the resultant ‘45, and Beggan swapped scores before Cox landed his second free of the afternoon to restore his side’s two-point advantage at the interval.

Buoyed by the introduction of McManus at the break, Monaghan soon wiped out their opponents’ advantage, and hit the front when Ward bagged his second point of the afternoon after 39 minutes.

The teams traded scores for the next 20 minutes, with McManus, Fintan Kelly and Dermot Malone keeping the scoreboard ticking over for Monaghan. Harney, Cox (free) and Kilroy did likewise for Roscommon before the late drama yielded two precious league points for last year’s Division Two champions.