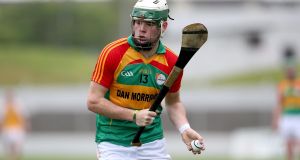 Marty Kavanagh secured a draw against Galway with his 11th point in the Allianz Hurling League Division 1A game at Dr Cullen Park. Photograph: Ryan Byrne/Inpho

Carlow’s Marty Kavanagh scored his 11th point of the game deep into injury time to give his county a deserved share of the points against Galway at Dr Cullen Park, completing a thrilling encounter before an attendance of 2,500.

Galway were never headed but could not shake off a spirited Carlow side who gained in belief as the game progressed. The visitors led by 0-11 to 0-7 at half-time and Joe Canning extended that lead with a pointed free two minutes after the restart for a foul on Jason Flynn.

But Galway’s expected domination never materialised as Carlow held their composure and slowly cut into the Galway lead to eventually draw level at 0-18 each on 68 minutes through a pointed free from Marty Kavanagh.

Galway twice regained the lead through a beautifully struck point from play by Aidan Harte and another from a Canning free. But Carlow found a response on each occasion with substitute Chris Nolan first and then Marty Kavanagh earning Colm Bonnar’s side a share of the league points.

“It was a display of our character. We are very proud to have held the All-Ireland finalists,” said Bonnar.

“It is a point on the board and also a good development but we cannot look past the next game which is away to Waterford.”

Micheál O’Donoghue, the Galway manager, was high in his praise of Carlow and the influence of Bonnar, saying the the Barrowsiders had made magnificent strides over the past 18 months .

“We had a lot of lads who needed experience. But Carlow worked really hard and stayed in the game,” said O’Donoghue.

“We are disappointed not be going home with the points but give credit to Carlow.”