Peter Keane knows only currency in Kerry is All-Ireland medals 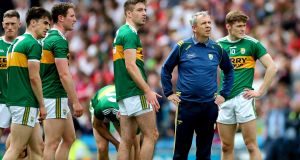 “I’d imagine there’s a huge difference between minor and senior,” says Tomás Ó Sé, addressing the question of where exactly Peter Keane finds himself in the recent history of Kerry football managers.

“But I think he’s a free shot, Kerry have a free shot, because everybody in the whole country reckons Dublin are going to win this.”

It’s the first day of football final week, and Ó Sé is in south Dublin to promote the Londis All-Ireland Sevens tournament, which takes place on Saturday at Kilmacud Crokes. By “free shot” Ó Sé means there is no great pressure or expectation on Keane going into Sunday’s showdown whilst acknowledging that won’t last forever.

Keane’s appointment last October was different on several fronts; he was no outsider, but nonetheless relatively unproven at senior level, his main success coming last summer when, in his third season as Kerry minor manager, he guided the county to a fifth successive All-Ireland title.

Still, sooner or later the expectation will be to win at least one All-Ireland, something the five previous successive Kerry managers all both realised and delivered: Eamonn Fitzmaurice, Jack O’Connor, Pat O’Shea, O’Connor again, and Ó Sé’s own uncle, the late Páidí Ó Sé.

Indeed Ó Sé played under all those previous Kerry managers, and knows well how that expectation can quickly surface. For Keane that may not be this year, but it doesn’t mean Sunday won’t matter as much to Kerry people, win or lose.

“They’ve never been at this level, and there will be an awful lot they will learn from this year,” he says.

“That doesn’t mean that they will be given any leeway in terms of performance, or in terms of tactics, or in terms of the way they set up, because they [Kerry people] would be unforgiving. But I think and as long as it’s not a major collapse, there will be a certain leeway.”

For Keane himself, that question of “pressure” doesn’t yet merit any great addressing.

“I think this team knows that the Kerry public are behind them,” he says. “They are very patient with them and I think they understand where we are at.”

Ask those previous Kerry managers that same question and you’d likely get a very different answer, depending on the particular point in their management term the question was posed. What is certain is they didn’t all leave smiling.

“Johneen, a chroí, don’t take that job at all, they’ll be giving out to you,” among the many striking passages in Keys to the Kingdom, Jack O’Connor’s story of “an outsider who led Kerry back to glory”. They were the last dying words of his mother, Sheila, spoken from her hospital bed in October 2003.

Long before O’Connor’s time it wasn’t so much an appointment as an anointment, and a job which often came with lots of giving out. Trace the trail before that and after Mick O’Dwyer’s 16 unbroken years, and eight All-Irelands later, Mickey Ned O’Sullivan and then Denis “Ogie” Moran did six fruitless seasons, where at times that pressure became a little too much.

Even with success comes some giving out. Fitzmaurice stepped aside after last summer’s Super-8s, a box full of anonymous letters part of his reason why, and it didn’t end pretty for Ó Sé either, even if his legacy as Kerry manager will always be about revitalising the county’s standing in the football world, twice returning the All-Ireland to its most accustomed home, in 1997, and 2000.

When O’Connor decided on a hiatus in 2007, Kerry found Ó Sé willing and able to deliver an All-Ireland that very same year, before closely losing the 2008 final to Tyrone. Still his term proved seamlessly successful when he stepped aside and O’Connor returned to the job in 2009, winning a third All-Ireland, making him the fourth most successful manager in the county’s history.

Then in came Fitzmaurice who, two years after O’Connor stepped down, delivered the 2014 All-Ireland to Kerry, the last county outside the capital to lay hands on it. It was meant to be Fitzmaurice’s job until 2020, before the rumblings of discontent became a little too much.

Keane’s first dip into management came when he trained the St Mary’s senior side, at the tender age of 27, later guiding them to All-Ireland junior success in Croke Park in 2011.  In 2014 he also took over the Legion senior management post and in his two years in charge Legion were promoted to Division One of the county league.

The now 47-year-old also enjoyed a moderate successful playing career of his own with St Mary’s in Cahersiveen, winning four county under-21 championship medals with South Kerry, and also played at minor and under-21 level for Kerry, captaining the under-21s to Munster success in 1992.

Keane is certainly no stranger outside of Kerry football either, his popular SuperValu and other businesses in Killorglin already making him something of a public figure in that part of the county, as well as his native Cahirciveen.

He’s also spread the expectation with an accomplished backroom team: James Foley and former player Tommy Griffin coming in from his minor management team, 1997 footballer of the year Maurice Fitzgerald and coach Donie Buckley both links with previous senior managements.

“There’s no question about it, it’s busy,” Keane says of the role. “I’m very lucky, my wife, Siobhán, and the three lads, Peadar, Barry and Micheál, I suppose have really taken up slack behind and in the SuperValu.

“And I suppose every day you’re alive and you’re awake, there’s some surprise hits you. Is this job any different to that? Sure, come here, I’m the luckiest fella ever. I’m over in Fitzgerald Stadium or here in Currans watching these fellas at night training. Sure, Jesus, what else could you ask for?”

Somewhere down the line, most likely, an All-Ireland.