Keeping Donegal on the road to success a costly business 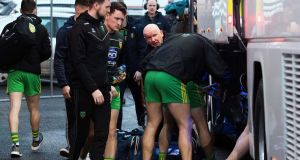 Declan Bonner and a party of 50, including players, backroom staff and officials will make the journey to Croke Park for the high-profile clash with Dublin. Photograph: Evan Logan/Inpho

When the final whistle goes in Croke Park this evening, the Donegal squad will shower, change and have a quick meal in the stadium catering facilities before heading for the north west on the team coach.

There will be 50 in the travelling party, including players, backroom and officials. Their arrival time depends on where in the county they are living. When Jamie Brennan and Paul Brennan hop out in Bundoran, the amusement arcades will have long shut but the Gweedore crew will still have another 90 minutes left of their journey. They’ll be turning the key to their front doors sometime after 2.30 in the morning.

Playing the All-Ireland champions in Croke Park is a marquee fixture for all Division One teams. It’s also a bit of an odyssey and, during a time when the annual expenses of fielding intercounty teams is a subject of hot debate, a considerable investment of both time and money.

For the Donegal players, clocking in for the Dublin game started at around Friday lunchtime.

“The vast majority of our boys will take a half day off work for which they won’t be reimbursed,” Mick McGrath, the county chairman, points out. “I think it’s important that we acknowledge that.”

When McGrath sits down to go through the logistics of Donegal’s away games, he is always trying to balance the welfare of the players with the realities of the annual budget. The Donegal GAA total team costs slipped €7,000 past the one million mark for all teams in 2018. Since then, McGrath and the Donegal board have been adamant that they keep it below that magical high water mark. Hotel rooms and transport costs tend to be fixed but the cost of catering, in particular, for a big squad takes patience and negotiation.

The Dublin game will involve six meals for the Donegal party: a cooked lunch on Friday afternoon in the Abbey Hotel, an evening meal in their overnight hotel at seven o’clock; tea and scones at half past nine; breakfast on Saturday morning; lunch at noon; a pre-match meal at four o’clock and then the post match-meal in the stadium.

He’s learned the hard way to try and shave on costs without compromising quality.

“You try and get the players the best food. It is not about walloping up a bit of curry at the end of the night. We work with our nutritionist and go from there. But if you go to a hotel and ask for a choice of salmon or beef, they will charge you for both for a party of 40. So we started the simple exercise of pre-ordering with the players and tailoring it that way.”

When the VAT rate was raised from 9 to 13 per cent, McGrath noticed that jump is costs straight away.

“Bang! That was an automatic five per cent increase on our bill. We had a fierce row with our caterers one night. I told them at the beginning that they just weren’t getting it. And one of them said, well then we can’t supply you. So that government decision just hit the GAA by five per cent.”

When Donegal played Clare in Ennis last year, McGrath decided to cut dessert from the post-match meal. He laughs now at the memory.

“A couple of the boys got onto the manager. ‘What’s going on Declan, why’s there no dessert?’ And Declan just shouted: ‘Blame the chairman!’”

McGrath had worked as liaison officer with Bonner on minor and U-21 teams, many of whose players are now on the senior squad. His way of dealing with issues is to try and have fun.

“And I got called every name under the sun when we got back on the bus. But I can take that. I was saying, ‘Jesus lads, ye are carrying too much weight anyhow’. At a petrol stop up the road, a few of the players headed into the shop and one of them handed McGrath a Cornetto when he got back on the bus.

This is McGrath’s third year as chairman. He is a former intercounty referee who has been involved with GAA teams at club and county level for decades. His business life and work as a publican in Ballyshannon gave him a good head for figures and organisational skills but he says he was unprepared for the scale of the financial realities that came with the role of county chairman. After the 2018 season, he began to work closely with Bonner and Mickey McCann, the Donegal hurling manager, to see how they could reduce costs.

“We looked at it from every angle. We looked for better value for overnight stays in hotels. We met people travelling by car to talk about start car pooling a bit more. Even if it is 700 a week you save over30 weeks; that adds up. For instance, we had quite a lot of players coming from college in Dublin to training. That was costing a lot in travel expenses. And the journey was severe on the players.”

McGrath always remembered an evening with the Donegal U-21 team when two car loads of players arrived from DCU and DIT for a session in Sligo. They ran hard for two hours, ate and went home again. They’d been crouched in a car for over six hours. A week later, three of the players had hamstring issues. Even then, he wondered if players wouldn’t be better studying the same courses within their county.

Letterkenny IT played in the Sigerson Cup for the first time this year, managed by Michael Murphy. They made it to the semi-final. Almost the entire panel was comprised of Donegal players. And the overall cost for 2019 was back to €949,270.

These are typical costs for inter-county teams. Donegal are one of the “big” contemporary football counties, having competed in two All-Ireland finals in the last decade, winning one. They are chasing a third successive Ulster title this year. They are third favourites to win the All-Ireland, albeit at 9/1 in comparison to Dublin’s 8/11.

The geographical size of the county doesn’t help. At half past six on Tuesday morning, two separate gym sessions were held in Donegal Town and Letterkenny. Both were supervised by S&C coaches and are allowed for within the budget. But it is individual S&C sessions for players returning from injury or physio’ sessions for recently injured players that quickly add up. A non-training day can easily mean €500-€700 from the purse.

The biggest source of Donegal’s income for 2019 was sponsorship, which is worth €300,000. It’s not huge considering the senior team’s profile: in comparison, Dublin are halfway through a five-year main sponsorship deal worth €4 million – which, it should be noted, covers senior men’s and women’s football, hurling and camogie teams and all underage teams and includes sponsorship of the performance centre.

Donegal are also completing a performance centre in Convoy. It will cost €2.2 million and will feature five pitches, three of those floodlit, six dressing rooms, meetings rooms and offices. Croke Park has provided €580,000 towards the cost. A further €300,000 came from the Sports Capital Grant. Fundraising has yielded €300,000. Donegal GAA borrowed €1 million, which the clubs in the county have agreed to repay over a 15-year period.

But in addition, Donegal GAA are raffling a four-bedroom house in Brownsbarn in Dublin. The aim is to sell 15,000 tickets at €100 each. The uptake has been good but it’s an ambitious method of raising funds.

Volunteerism remains the life-source of the association in counties like Donegal. It is steadfastly amateur

“It’s a huge undertaking for us. We have set up a website, winyourhouseindublin.com, where people can buy tickets. It was a considerable financial outlay buying the property and setting this up. We have a fundraising committees in London, the US and another one in Dublin. Our outlay will be between €500–€600,000, which is daunting. There is a risk involved. But then there is a risk involved every year in balancing the books in our county.”

For all of this, Donegal GAA employs just one person in its administrative offices. Volunteerism remains the life-source of the association in counties like Donegal. It is steadfastly amateur.

There is a growing sense that the traditional chairperson’s role has to evolve into a CEO-type function and become a full-time position. McGrath is wary of that development, not least because it would saddle the annual accounts with a salary. Plenty of people told him he must be mad to take on such a thankless and time-consuming role.

“And there are negatives,” he allows. “And there are hurdles on the road. If you are stressed out by those, then don’t to it. But you have to look at taking on the role of chairperson as a challenge and as a proud moment in your life. And I do see it that way.”