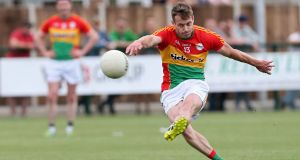 Paul Broderick scored 1-5 for Carlow in the victory over Sligo. Photograph: Gerry McManus/Inpho

Carlow footballers made a winning start to life in Division 3 of the Allianz Football League with a fully merited seven-point win over 14-man Sligo before an attendance of 1,500 at Dr Cullen Park on Sunday.

Carlow were in front within a minute of the throw-in through a long-range point from open play by the influential Paul Broderick. The were 0-5 to 0-1 ahead on the half hour when a Broderick’s 45 was fumbled by a Sligo defender under his own crossbar for the game’s only goal.

At half-time Carlow led 1-6 to 0-3 and although the Yeats County enjoyed a significant period of second-half dominance, the closest they came was four points (1-7 to 0-6) through a pointed free from Niall Murphy on 53 minutes.

But the Sligo challenge unravelled on 58 minutes when Galway referee James Molloy red-carded midfielder Darragh Cummins for a striking offence.

The visitors only score from play came in second-half injury-time from substitute Liam Gaughan.