Call for Fitzgibbon Cup hurlers to be exclusively available to colleges 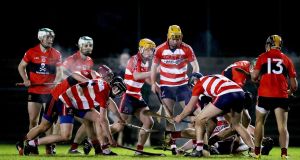 Waterford manager Derek McGrath has suggested ring-fencing Fitzgibbon Cup players for the month of February. His views come at a time when those involved in the third-level competition have expressed misgivings about its future in the context of growing pressures at inter-county level.

IT Carlow manager DJ Carey became the latest to do so, at the weekend but a week previously Nicky English and Brian Lohan, who both were involved as coaches with UCD and UL, as well as current UCD coach Conor O’Shea all made known their concerns that the Fitzgibbon was being undermined in this way.

McGrath, a medallist with UCC in the 1990s, had also drawn attention to these difficulties 12 months ago in the middle of last year’s league campaign. His view is that for the weeks involved, college players should by rule be free to concentrate on Fitzgibbon rather than have to play for their counties as well.

“Look at the quality of people involved at management level in the Fitzgibbon, Tom Kingston, Pat Ryan from Sars involved in CIT, DJ Carey – all seasoned GAA people. Sometimes, when you go to a college for first year, second year, third year, you have an attachment to the college and the jersey of the college.

“I have said this previously but I remember Tony Kelly being interviewed after the UL final against WIT a few years ago and he talked about the bond in college being a special bond. I know the rugby model where they control how many games that they play for Leinster and Munster. I don’t know if they can do that, but we would certainly like to be in a position to let our Fitzgibbon guys just play the Fitzgibbon, if you like, and we work away with 17 or 18 and bring in a few new guys and play them consistently for the league.”

He accepted that a few bad league results could alter attitudes.

“That is what we would like to be able to do but then all of a sudden, you lose three or four matches and they will be saying you should be able to expose your guys to the league – the Tadhgs [de Búrca] and Conor Gleesons and all those playing Fitzgibbon.”