Murphy returns to his devastating best as Donegal put Roscommon away 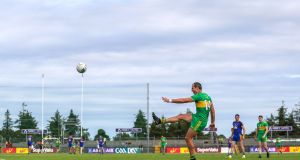 In the 26th minute of this game in a sun-drenched Hyde Park, Donegal supporters saw something close to the return of the prodigal son. It was Michael Murphy, thundering onto a ball from the full forward position, shaking off Niall McInerney on the turn and then accelerating towards Colm Lavin’s goal. You could almost forget that Murphy on the move with the ball is one of the more majestic sights in Irish – or any – sport.

As it happened, Murphy fluffed his solo and the move came to nothing. But those few seconds provided a portent for what was to come. A menacing figure in front of the Roscommon goal, Murphy fired three points in a row in the last seven minutes of the first half in a performance that felt like a throwback to more carefree days.

One of the issues for Donegal in recent seasons is that the Glenswilly man felt obliged to be everything to everyone, all at once: captain, leader, workhorse, playmaker. All of a sudden it was like realising that Hendrix had been acting as roadie for a few seasons. Here, on a sunny Saturday evening, he remembered the simpler joy of being one of the best inside forwards the game has seen. And it was a glory.

Donegal were 0-10 to 0-5 ahead at half-time and left about half a dozen excellent shooting chances behind them. It took them about 15 minutes to get to grips with a much more defensively oriented Roscommon framework, with Niall Kilroy and Brian Stack dropping deep as the home team vowed to give nothing away through the centre of their defence.

But with Michael Langan at first competitive and then imperious under Lavin’ s stress-tested kick-outs, Donegal had enough possession to play at their pace, with Frank McGlynn and the typically excellent Ryan McHugh orchestrating their close-quarter running game.

Roscommon started brightly here, with the Murtagh brothers and Brian Stack striking wonder points from distance for a 0-3 to 0-1 lead after seven minutes. Those scores made a convincing argument that they had shaken off the blues inflicted by Tyrone a week ago.

Two fierce defensive sequences in which McHugh and Murphy were crowded out and scalped generated a rebel yell from the stand. But the trouble with wonder scores is that they are just that: four of Roscommon’s first-half scores from play were spectacular but for too long they were confined to trying to find Diarmuid Murtagh and Cathal Cregg, their deep-lying forwards, with hugely ambitious long-range passes. It was the sort of stuff that the Donegal defenders cope with routinely.

It was a strange game, heated in places, listless in others, with the Roscommon men landing sporadic points from distance as Donegal exerted a stronger grip on the game and moved into a comfort zone.

Odhrán MacNiallais unleashed that sensational left foot of his for three superb scores. At the other end of the field, Neil McGee, replacing the injured Eoghan Ban Gallagher, had a forceful defensive game; another throwback.

Donegal’s main failure lay in not killing the game earlier: a sweeping counter-attack saw MacNiallais rap a ball off the post in the 60th minute, with the score at 0-16 to 0-9, keeping Roscommon hopes faintly alive. MacNiallais finished with four points from play, each an exercise in aesthetics. It was clear, over the 70 minutes, that he prefers to play facing the goal posts, drifting late into passages of play and floating those curling points of his.

There would be no turn in Roscommon’s fortunes. Without the ball, they could do little and the last 10 minutes ebbed out in the pleasant heat as a series of substitutes and the Donegal men playing keep ball for as long as they could, with Leo McLoone edging forward to clip a point which brought their total to 0-19.

A second defeat consigns Roscommon to what will be a tough test in Dublin against Croke Park. Donegal, meantime, find that the magical mystery tour that is the Super 8s, returns them to the most familiar of places: the dressingrooms of Ballybofey. And just down the corridor the familiar voices of Tyrone. It’s been a while since Murphy posted 0-9, a statistic that won’t go unnoticed by Mickey Harte and company. All to play for.