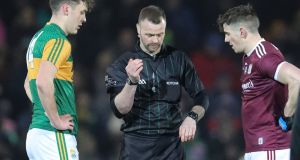 A motion to allow the Kerry senior management to select the team captaincy has failed to reach the two-thirds majority at a monthly county board meeting in Tralee.

Delegates were presented with the motion that read: “That the captain of the Kerry senior hurling and football teams shall be selected by the team management in consultation with the chairman of the Kerry County Committee.”

If the motion had passed it would have applied from next year onwards. There was some indication that current Kerry football manager Peter Keane was in favour of the rule change.

It follows some fresh discussions after county champions East Kerry last month confirmed their nomination of David Clifford for the Kerry football captaincy for 2020, a sort of early birthday present for the two-time All-Star who only turned 21 two days later.

Kerry are one of the last counties to afford their county champions the honour of nominating the team captaincy (similarly with Kilkenny in hurling) only it’s not always a straightforward process.

East Kerry ended their 20-year wait for that title last November, beating three-time defending champions Dr Crokes in a fairly rousing contest. As one of the nine divisional or district teams, however, East Kerry didn’t get the honour of representing Kerry in the Munster club championship (that honour went back to Austin Stacks, who won the eight-team Division One club title back in early May).

However, they do get to nominate the captain, and the star forward was confirmed as their pick. Clifford’s club Fossa, in Killarney, are one of those clubs that form East Kerry; Clifford also has a close relationship with Keane, who also managed him as a Kerry minor on the team that won back-to-back All-Ireland medals in 2016 and 2017.

Having won his back-to-back All-Star in 2019, Clifford chipped in with 1-3 in the county final, older brother Paudie equally influential, and given Clifford’s already pivotal and assured place in the Kerry team he always appeared the most likely candidate for that captaincy in 2020.

However some traditions die hard in the GAA, especially it seems with Kerry football, and while the captaincy nomination issue was raised again last year, that honour remains with East Kerry.

There was also some debate about tradition in 2019 too, when Gavin White was nominated captain by Dr Crokes: at 22 he had never played a single league game for Kerry, and while he did start the drawn All-Ireland final against Dublin, didn’t start the replay – and Paul Murphy took over the captaincy instead.